Simulation showing the major glaciers of the Amundsen Sea Embayment over three centuries of sustained retreat. The colours show the ice flow speed in metres per year.
The grounding line, which separates the grounded (resting on bedrock) ice from floating ice, is represented in bright blue.
Credit: Cornford et al., The Cryosphere, 2015

It may be the biggest climate change story of the last two years.
In 2014, several research groups suggested that the oceanfront glaciers in the Amundsen Sea region of West Antarctica may have reached a point of “unstoppable” retreat due to warm ocean waters melting them from below. There’s a great deal at stake — West Antarctica is estimated to contain enough ice to raise global sea levels by 3.3 meters, or well over 10 feet, were it all to melt.
The urgency may now increase further in light of just published research suggesting that destabilization of the Amundsen sea’s glaciers would indeed undermine the entirety of West Antarctica, as has long been feared. 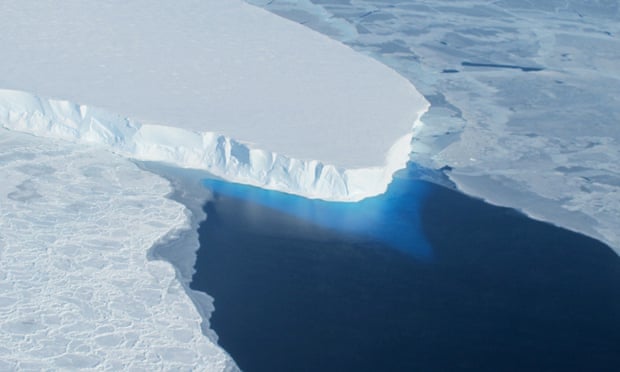 In a new study published Monday in the Proceedings of the National Academy of Sciences, Johannes Feldmann and Anders Levermann of the Potsdam Institute for Climate Impact Research use a sophisticated climate model to study what will happen if these glaciers are, indeed, fully destabilized.And in essence, they find that the process of retreat doesn’t end with the region currently up against the ocean.
“We showed that there is actually nothing that stops it,” said Levermann.
“There are troughs and channels and all this stuff, there’s a lot of topography that actually has the potential to slow down or stop the instability, but it doesn’t.”
Or as the paper puts it: “The result of this study is an if–then statement, saying that if the Amundsen Sea Sector is destabilized, then the entire marine part of West Antarctica will be discharged into the ocean.”


The Potsdam Institute for Climate Impact Research
shows what would happen if glaciers in West Antarctica melted.

West Antarctica can actually be considered the smallest of three planetary ice sheets — Greenland contains some 6 meters (20 feet) of potential sea level rise, and East Antarctica is the most vast of all, at nearly 60 meters, or 200 feet.

However, West Antarctica is currently believed to be the most vulnerable to rapid, large scale change, due to the fact that the Amundsen Sea’s glaciers are rooted on a seabed that slopes downward as you move further inland, in some places plunging a mile or more below sea level.
The region’s largest glacier, the gigantic Thwaites, is bigger than Pennsylvania and over a mile in total thickness in places — and may be the single most vulnerable point.

Indeed, Antarctic scientists have expressed a strong consensus that they need to conduct a lot more research in this very remote area as soon as possible, to determine how fast the change could happen.

Antarctica is vital to the planet’s climate system.

The current study was not an example of — and cannot replace — this difficult fieldwork.
Rather, the researchers used a complex ice sheet model that simulated the entire West Antarctic ice sheet, as well as the Antarctic peninsula and some of East Antarctica.
They then simulated what they termed a 20 to 200 year “perturbation” to the region, in the form of increased rates of melt similar to what is believed may have already happened.
“Our modeled sea-level contribution from the perturbed region lies well within the range of observations,” they say.

With a 60 year or greater perturbation, the model — which, the researchers caution, is only “a single realization of an ice-sheet model that applies approximations to the ice dynamics” — then produced a retreat that continues even without continuance of the perturbation.
That is, after all, precisely what has been feared — that the region has an inherent “marine ice sheet instability,” as researchers put it.
“If you have a situation where the bedrock is declining when you go inland, that means that wherever the grounding line is, it is thicker the further it is inland,” explains Levermann.
“Which means the [ice] flux is bigger the further you go inland. Which means you lose more ice the further you go inland, which is the vicious cycle.”
Levermann confirmed, by email, that this in effect means that there is an “inherent” instability to West Antarctica, based on his new research.

Here’s a visualization of what is happening with West Antarctica, and how a “marine ice sheet instability” works:

The critical issue here is, of course, the speed at which this could all occur.
The new study’s simulations show the loss of West Antarctica playing out over thousands of years. But many scientists worry that at least some of the change could happen faster.

“We know very little about the new world we are entering of rapid retreat into deep basins,” said Sridhar Anandakrishnan, a glaciologist at Penn State University who has conducted research atop Thwaites glacier and reviewed the study for the Post, by email.
“There are likely processes there that we haven’t fully accounted for. For example, as the grounding line shifts farther back, the ice front may start to fracture and fail — something we don’t see today because we don’t have any deep grounding lines to study and use as analogies.”
When asked how fast he thought all of this could unfold, Levermann underscores that we simply don’t know.
“And by we don’t know, I mean, we don’t know,” he says.
“I don’t want to say it’s quicker, but it’s much more likely that it’s faster than these thousands of years, than [that] it’s slower.”
He points out that based on reconstructions of the planet’s past, there are reasons to think sea levels can rise fairly rapidly.

The study therefore concludes that:


The currently observed retreat in West Antarctica hence might mark the beginning of a millennial period of self-sustained ice discharge from West Antarctica and require long-term global adaptation of coastal protection, such as the building or rebuilding or raising of dykes, the construction of seawalls, or the realization of land fills in the hinterland.

Given the significance of the findings, the Post asked several other Antarctic experts to comment on the work.
Anandakrishnan, who was concerned that sea level rise could happen even faster than in the study, nonetheless  called the work a “fascinating study that shows the tipping points in the stability of the whole West Antarctic Ice Sheet (not just Thwaites or Pine Island, as some previous studies have shown)” by email.
“The retreat of Thwaites continues past any ‘local’ ups and downs in its bed, and affects the glaciers that flow into the Ross Ice Shelf and into the Filchner Ronne Ice Shelf.”
(You can see these regions on the map above.)


Antarctic sea ice likely reached its annual maximum extent on Oct. 6, barring a late season surge. This video from NASA shows the evolution of the sea ice cover of the Southern Ocean from its minimum yearly extent to its peak extent.
see NASA

Jonathan Bamber, a glaciologist at the University of Bristol in the UK, also praised the study, calling the model “sophisticated” and adding, “It make take millennia for a full collapse but once it’s started we’re fully committed to multiple metres of sea level rise. How quickly we reach this point of no return, and how rapidly it proceeds, are sensitive to certain model details but what is clear is that the next few decades will determine whether the WAIS is just endangered or on its path to extinction.”

What’s striking is that even though we are now having this discussion about possible destabilization of West Antarctica, scientists are still not fully sure about what has caused the phenomenon.
One suspicion, however, is that the warming of the climate as a whole has changed wind patterns around Antarctica which, in turn, has also changed ocean patterns — allowing warmer water to reach the bases of mostly submerged glaciers that hold back the gigantic volumes of inland ice.

There is some concern that similar processes may also play out in submarine based glaciers of East Antarctica — although so far, scientists have not identified a part of the Antarctic continent that is both as vulnerable, and also experiencing as rapid change, as West Antarctica.
Despite all of this, Levermann cautions that the results should not be over-interpreted in an alarmist way, since whatever change may be occurring, it is certainly not expected to happen all at once.
“No one has to be afraid of sea level rise,” he says.
“One should be worried about sea level rise. It is not a threat to people, it’s a threat to things, and land, and cultural heritage.”