Dolphins use blue whale to surf !

Whale watching passengers and crew aboard Captain Dave's Dolphin and Whale Watching Safari
off Dana Point, California saw something even rarer than a blue whale.
"The crew caught on tape an amazing interspecies encounter of a small pod of bottlenose dolphins catching a ride, actually surfing, on the front of a giant blue whale," said Captain Dave Anderson.
"This kind of a free ride is possible for these dolphins by positioning themselves in front of this rare and endangered whale and riding the pressure wave created by the force of this giant moving through the water."

The ocean might seem solely a perilous place, where countless marine creatures are endlessly fighting for survival in the dark depths.
But as it turns out, for our seagoing mammalian counterparts at least, life among the waves isn't harsh enough to keep from having a good time.

Recently, Dolphin Safari tour operator Captain Dave Anderson and his crew filmed a remarkable sight off the coast of Dana Point, California -- a pod of wild bottlenose dolphins engaged in a bit of playtime with a massive blue whale. 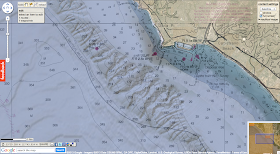 It may be a little hard to see in the video, but Anderson tells the Dana Point Patch that the dolphins appeared to be, in effect, 'surfing' on the wave generated by the 80-foot whale swimming along the surface of the water.

"This type of surfing behavior is usually seen when dolphins ride the pressure wave created in front of a boat. However, this time the dolphins were having fun and “surfing” the largest animal in the world, a blue whale," says Anderson, noting that such interspecies interaction -- particularly for amusement is extremely rare.
"Even though blue whales and bottlenose dolphins coexist in some of the same oceans, they do not run in the same social circles and are not typically seen together, making this a unique and memorable whale watching encounter for all."

Interestingly, this isn't the first time that dolphins and whales have been caught horsing around together in the wild.
On a least two separate occasions, dolphins were been observed playing with humpbacks whales in a slip-and-slide sort of game they appear to have invented.

Many species interact in the wild, most often as predator and prey.
But recent encounters between humpback whales and bottlenose dolphins reveal a playful side to interspecies interaction.
In two different locations in Hawaii, scientists watched as dolphins "rode" the heads of whales: the whales lifted the dolphins up and out of the water, and then the dolphins slid back down.
The two species seemed to cooperate in the activity, and neither displayed signs of aggression or distress.
Whales and dolphins in Hawaiian waters often interact, but playful social activity such as this is extremely rare between species.

It is less clear in this recent incident if the blue whale was a happy participant, or merely trying to move on its way -- but a playful encounter with dolphins seems an opportunity worth relishing.