Gibraltar serves as reminder of headaches of empire 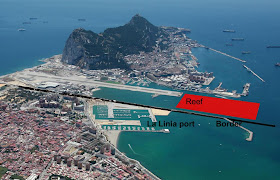 To many Europeans, this week’s tensions between the UK and Spain over Gibraltar must have been baffling – an argument over 2.6-square miles of Iberian rock. (see YouTube) 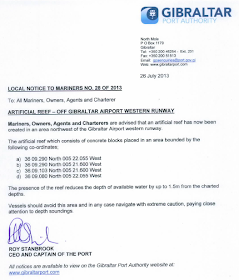 from Gibraltar port NtM
A map attached to a Notice to Mariners issued by the Gibraltar Port Authority last week alerting vessels to its presence.

It provides coordinates for each of the 70 concrete blocks used to create the reef.
Curiously, the Spanish pier in the upper half of the chart appears to be inside British waters

Workers throw concrete blocks from a Gibraltar tug into the sea in an area where Spanish fishing boats usually sail around, off Gibraltar's coast, on July 25, 2013 (see YouTube)
photo : A. Carrasco Ragel / EPA

>>>geolocalization with the Marine GeoGarage <<<

But the row was a reminder of how Britain’s remaining colonial outposts can cause friction with allies and headaches in Whitehall.
Gibraltar – controlled by the UK since 1713 but claimed by Spain – is one of 14 British Overseas Territories, ranging from prosperous Bermuda in the north Atlantic to the tiny Pitcairn Islands in the Pacific and the vast wilderness of the British Antarctic Territory.

While the poisonous relationship with Argentina over the Falkland Islands is the most obvious source of trouble from these remnants of empire, Gibraltar is unique in its potential to cause strife with an EU ally.
Mariano Rajoy, Spain’s prime minister, said on Friday his country would take “all legal measures” to protect its interests in the territory after days of bickering with London over fishing rights and border controls.
His UK counterpart, David Cameron, had earlier in the week voiced “serious concern” about long delays facing people trying to enter Gibraltar from Spain and a threat by Madrid to impose a border fee.
“The big worry with Gibraltar is that it will turn into the next Falklands,” said one Foreign Office official. “Not in terms of starting a war but getting to such a stage that it infects all other parts of the bilateral relationship.
“We don’t want to end up in a situation like we have with Argentina, where every time we try to discuss any piece of government business, whether the economy or wider regional affairs, discussions are hijacked by diplomats wanting to argue about the Falklands.”

The Siege of Gibraltar, 1782 by George Carter

It is not just disputes over who should own what that can cause trouble.
The actions of administrations running overseas territories can also create aggravation for London.
In 2009, Whitehall took direct control of the Turks and Caicos islands after the local government there was ensnared in a corruption scandal.
Self-rule was restored last year.
Meanwhile, David Cameron, UK prime minister, faced embarrassment earlier this year when his push for a G8 clampdown on tax avoidance was initially resisted by low-tax UK territories such as Bermuda.
The territories also cost the British taxpayer.
Although they are nominally self-sufficient, with revenues from tax, tourism, international finance and even postage stamps, they are protected by UK forces.
London refuses to disclose how much it spends defending its overseas territories.
The defence ministry says a visit to Gibraltar later this month by four warships and six support vessels is routine and unrelated to recent tensions.
But their arrival, en route to the Middle East, will be seen as a statement of British commitment.
As foreign secretary in 2002, Jack Straw proposed that the UK and Spain should share sovereignty of Gibraltar.
But the idea was quashed by a referendum among its nearly 30,000 residents, who voted 98 per cent against it.

A vote earlier this year on the Falklands saw just three out of 1,516 vote against UK citizenship.
In the words of one Foreign Office official: “Why are [the overseas territories] still British? Because they want to be.”
But there are other reasons.
The first is their military significance.
Many of them provide useful army or navy bases in places the UK otherwise would not be able to reach.
In 1982, the British used one territory, Ascension Island, from which to launch ships to protect another, the Falklands.
Two UK-controlled areas of Cyprus provide a staging post for the RAF in the Mediterranean.
These were important during the conflict in Libya, when Cyprus was used as a base for UK air patrols.
Davis Lewin, political director of the Henry Jackson Society, a foreign policy think-tank, said: “The democratic point is important but there is a much bigger strategic argument [for keeping the overseas territories], which people tend to forget in peacetime.”

It is not only the UK which relies on these areas: they are often important to the US.
The British government forcibly removed native islanders from Diego Garcia – part of the British Indian Ocean Territory – in the 1960s and 70s to allow the US to build a naval base there.
It has since been used as a CIA “black site”, where US aircraft refuelled while transporting prisoners in the war on terror.
But perhaps the main source of support for keeping the territories is domestic.
To many Britons still mourning the decline of UK power abroad, the loss of the final vestiges of empire would be intolerable.
Nearly two-thirds of British voters said in 2012 that the Falkland Islands should be protected “at all costs”.
When Peter Hain, the former Welsh secretary, revived the idea earlier in the week that the UK and Spain should share sovereignty over Gibraltar, he found himself politically isolated.
The predominant view in Westminster is summed up by Andrew Rosindell, the Conservative MP, who makes the case for British sovereignty based on instinct and emotion.
“It is . . . important to defend a member of your own family which may be a long way away but has a cultural and historical link,” he says.
“You don’t give away British people.”