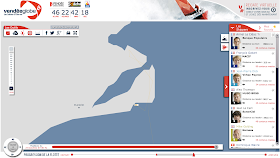 Although Mr Stamm was only about halfway through the race, he said he was now more than 3500km behind the race leader and it was unlikely he could still win.
In his previous attempt at the Vendee Globe race, he had to retire due to damage, so this year's race was now more about getting to the finish, he said.
Peio at 8:11 AM