Breathtaking ultra high resolution photos of mankind's historic first steps on the Moon...
Apollo 11 on the lunar Sea of Tranquility.

For more than four decades, the powerful engines that helped take the Apollo 11 mission to the moon have rested in the Atlantic.
Now Amazon CEO and space enthusiast Jeff Bezos wants to raise at least one of them to the surface.

An undersea expedition spearheaded by Bezos used sonar to find what he says are the F-1 engines located 4,270 metres (14,000ft) below the ocean surface.
Bezos said on his blog he is drawing up plans to recover the sunken engines, part of the Saturn V rocket that launched Neil Armstrong, Buzz Aldrin and Michael Collins on their moon mission. Engineers at the Marshall Space Flight Center install the F-1 engines on the S-IC stage thrust structure at the S-IC static test stand.
Engines are installed on the stage after it has been placed in the test stand.
Five F-1 engines, each weighing 10 tons, gave the booster a total thrust of 7,500,000 pounds, roughly equivalent to 160 million horsepower.
(source NASA)
The five engines dropped into the sea as planned minutes after liftoff in 1969. (video)
Four days later, Armstrong and Aldrin walked on the moon.
"We don't know yet what condition these engines might be in," he wrote.
"They hit the ocean at high velocity and have been in salt water for more than 40 years. On the other hand, they're made of tough stuff, so we'll see." 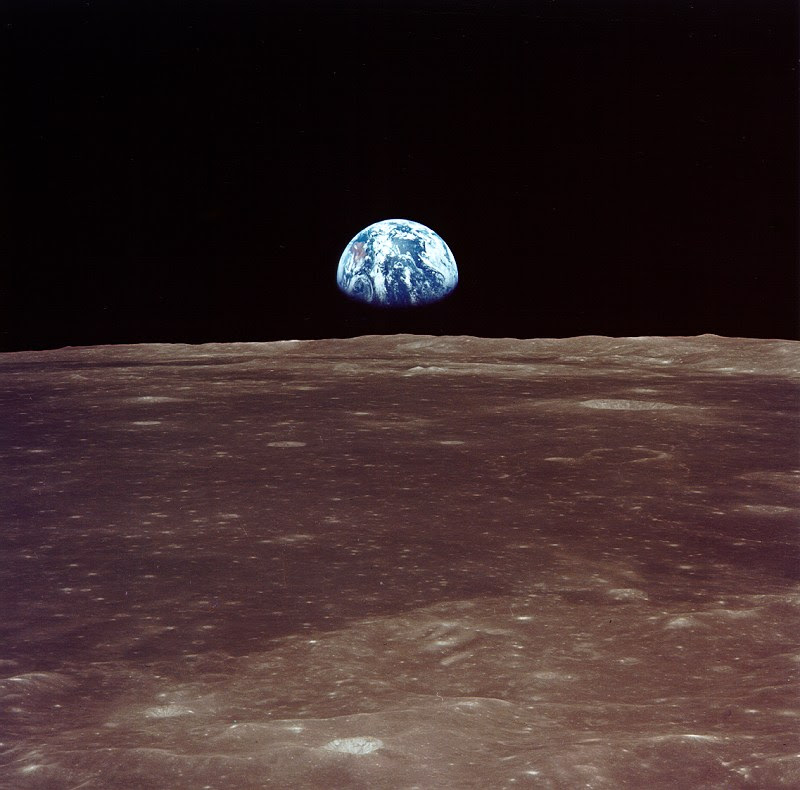 Apollo 11 Earthrise
Bezos acknowledged the engines were the property of Nasa, but said he hoped they will be displayed in museums.
Nasa expressed excitement about the find.
The space agency said it had not been formally contacted by Bezos and was waiting for further information.

"There has always been great interest in artefacts from the early days of space exploration and his announcement only adds to the enthusiasm of those interested in Nasa's history," spokesman Bob Jacobs said in a statement.

The sea floor is littered with spent rockets and flight parts from missions dating back to the dawn of the space age and it's unknown what survived decades later after crashing into the ocean.

In 2009, a private company salvaged Gus Grissom's Mercury capsule that accidentally sank in the Atlantic after splashdown in 1961.
It was restored and displayed at the Kansas Cosmosphere and Space Center.

Bezos's planned Apollo recovery is the latest deep-sea adventure by the wealthy.
Titanic director James Cameron descended to Earth's deepest spot in the western Pacific Ocean on Sunday, seven miles below the surface, which he described as an alien world.
Sir Richard Branson plans a similar dive to the deepest part of the Atlantic, the Puerto Rican trench, later this year.

It was not immediately clear when Bezos's team spotted the Apollo engines.
Bezos offered few details about the discovery and did not say how he knew the engines were from Apollo 11.
No timetable has been set for the recovery.