From The Guardian by Paul Watson

The long-lost ship of British polar explorer Sir John Franklin, HMS Terror, has been found in pristine condition at the bottom of an Arctic bay, researchers have said, in a discovery that challenges the accepted history behind one of polar exploration’s deepest mysteries.
HMS Terror and Franklin’s flagship, HMS Erebus, were abandoned in heavy sea ice far to the north of the eventual wreck site in 1848, during the Royal Navy explorer’s doomed attempt to complete the Northwest Passage.
All 129 men on the Franklin expedition died, in the worst disaster to hit Britain’s Royal Navy in its long history of polar exploration.
Search parties continued to look for the ships for 11 years after they disappeared, but found no trace, and the fate of the missing men remained an enigma that tantalised generations of historians, archaeologists and adventurers.

The HMS Terror, a long 168 years lost British Ship, was found in pristine condition
under 80 feet of water by the Arctic Research Foundation.

Now that mystery seems to have been solved by a combination of intrepid exploration – and an improbable tip from an Inuk crewmember.
On Sunday, a team from the charitable Arctic Research Foundation manoeuvred a small, remotely operated vehicle through an open hatch and into the ship to capture stunning images that give insight into life aboard the vessel close to 170 years ago.
“We have successfully entered the mess hall, worked our way into a few cabins and found the food storage room with plates and one can on the shelves,” Adrian Schimnowski, the foundation’s operations director, told the Guardian by email from the research vessel Martin Bergmann.
“We spotted two wine bottles, tables and empty shelving. Found a desk with open drawers with something in the back corner of the drawer.” 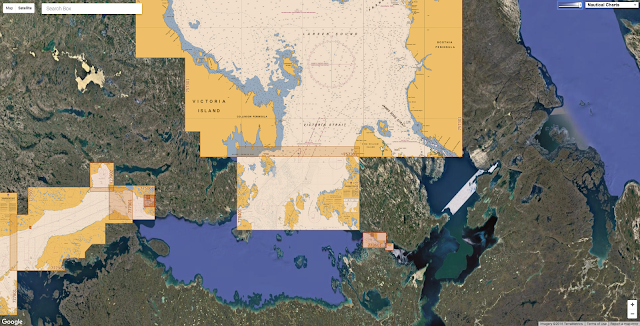 The well-preserved wreck matches the Terror in several key aspects, but it lies 60 miles (96km) south of where experts have long believed the ship was crushed by ice, and the discovery may force historians to rewrite a chapter in the history of exploration.
The 10-member Bergmann crew found the massive shipwreck, with her three masts broken but still standing, almost all hatches closed and everything stowed, in the middle of King William Island’s uncharted Terror Bay on 3 September.
After finding nothing in an early morning search, the research vessel was leaving the bay when a grainy digital silhouette emerged from the depths on the sounder display on the bridge of the Bergmann.
“Everyone was up in the wheelhouse by that point in awe, really,” said Daniel McIsaac, 23, who was at the helm when the research vessel steamed straight over the sunken wreck.
Since, then, the discovery team has spent more than a week quietly gathering images of the vessel and comparing them with the Terror’s 19th century builders’ plans, which match key elements of the sunken vessel.
At first, the Terror seemed to be listing at about 45 degrees to starboard on the seabed. But on the third dive with a remotely operated vehicle, “we noticed the wreck is sitting level on the sea bed floor not at a list - which means the boat sank gently to the bottom,” Schimnowski said Monday.
About 24 metres (80ft) down, the wreck is in perfect condition, with metal sheeting that reinforced the hull against sea ice clearly visible amid swaying kelp.
A long, heavy rope line running through a hole in the ship’s deck suggests an anchor line may have been deployed before the Terror went down.


HMS Erebus and HMS Terror: The Tragedy of the Franklin Arctic Expedition
May 19th 1845: Under the command of Rear Admiral Sir John Franklin, the largest and most well equiped Arctic Expedition of it's time set out in search of a prize that had claimed the lives of countless others before: The Legendary Northwest Passage, a trade route around the frozen wastes of the North American Arctic.
Equipped with the latest charts, equipment 3 years worth of provisions, packed within tinned food cans, and 129 Officers, Sailors and Royal Marines from the Woolwich Division's Light Infantry, few doubted the expedition would be a success and for those who set out it was to be the adventure of a lifetime, another triumph of British Science over nature.
Yet as the HMS Erebus and HMS Terror entered the frozen wastes of the Arctic, what was to be a great adventure became a living nightmare when the Erebus and Terror became trapped in the ice off King William Island and the men soon discovered their 3 years worth of food had become poisoned by lead from the cans it was kept in.
For nearly a decade the trapped men would slowly succumbed to the toxic food, disease, starvation, madness, the elements and desperate attempts to reach safety.
By the time rescuers found their camps, the Erebus and Terror had vansihed and scattered across the frozen Arctic wastes 130 Officers, Sailors, and Royal Marines, including Sir John Franklin, lay dead, silent reminders that overconfidence in technology will always end in disaster
If true, that sets up the tantalising possibility that British sailors re-manned the vessel after she was abandoned at the top of Victoria Strait in a desperate attempt to escape south.
One crucial detail in the identification of the ship is a wide exhaust pipe rising above the outer deck.
It is in the precise location where a smokestack rose from the locomotive engine which was installed in the Terror’s belly to power the ship’s propeller through closing sea ice, said Schimnowski in a phone interview.
The ship’s bell lies on its side on the deck, close to where the sailor on watch would have have swung the clapper to mark time.
And the majestic bowsprit, six metres (20ft) long, still points straight out from the bow as it did when the crew tried to navigate through treacherous ice that eventually trapped Erebus and Terror on 12 September 1846.
The wreck is in such good condition that glass panes are still in three of four tall windows in the stern cabin where the ship’s commander, Captain Francis Crozier, slept and worked, Schimnowski added.
“This vessel looks like it was buttoned down tight for winter and it sank,” he said.
“Everything was shut. Even the windows are still intact. If you could lift this boat out of the water, and pump the water out, it would probably float.”

A chart illustrative of the cruise of the American Arctic expedition in search of sir John Franklin in the years 1850 & 51 fitted out by Henry Gunnell ... commanded by E.J. De Haven ... /
compiled by P.M. Geo. P. Welsh ... under the direction of M.F. Maury ... from materials in the Bureau of Ordnance and Hydrography Welsh, George P.; Maury, M.F. (1806-1873)
Scale ca. 1:5.000.000
Publisher: Washington, United States Hydrographical Office

The Arctic Research Foundation was set up by Jim Balsillie, a Canadian tech tycoon and philanthropist, who co-founded Research in Motion, creator of the Blackberry.
Balsillie, who also played a key role in planning the expedition, proposed a theory to explain why it seems both Terror and Erebus sank far south of where they were first abandoned.
“This discovery changes history,” he told the Guardian.
“Given the location of the find [in Terror Bay] and the state of the wreck, it’s almost certain that HMS Terror was operationally closed down by the remaining crew who then re-boarded HMS Erebus and sailed south where they met their ultimate tragic fate.”

The 21st-century search for Franklin’s expedition was launched by Canadian former prime minister Stephen Harper as part of a broader plan to assert Canadian sovereignty in the Arctic and promote development of its resources – including vast reserves of oil and natural gas, which will be easier to exploit as the Arctic warms and sea ice disappears.
Parks Canada underwater archeologists have led the mission since it began in 2008. Now they must confirm the wreck is Terror, either by examining the foundation’s images or visiting the site themselves.
With the first winter snow already falling in the High Arctic, Terror Bay will soon be encased in thick sea ice.

The latest discovery was made two years and a day after Canadian marine archeologists found the wreck of Erebus in the same area of eastern Queen Maud gulf where Inuit oral history had long said a large wooden ship sank.
The same stories described startled Inuit stumbling upon a large dead man in a dark room on the vessel, with a big smile.
Experts have suggested that may have been a rictus smile, or evidence that the man had suffered from scurvy.

Parks Canada archeologists found Erebus standing in just 11 meters of ocean.
Sea ice had taken a large bite out her stern, and more than a century of storm-driven waves had scattered a trove of artifacts around the site.
So far, archaeologists have brought up the bell from Franklin’s flagship, a cannon, ceramic plate and other objects.
Inuit knowledge was also central to finding the Terror Bay wreck, but in a more mysterious way. Crewman Sammy Kogvik, 49, of Gjoa Haven, had been on the Bergmann for only a day when, chatting with Schimnowski on the bridge, he told a bizarre story.
About six years ago, Kogvik said, he and a hunting buddy were headed on snowmobiles to fish in a lake when they spotted a large piece of wood, which looked like a mast, sticking out of the sea ice covering Terror Bay.
In a phone interview, Kogvik said he stopped that day to get a few snapshots of himself hugging the wooden object, only to discover when he got home that the camera had fallen out his pocket.
Kogvik resolved to keep the encounter secret, fearing the missing camera was an omen of bad spirits, which generations of Inuit have believed began to wander King William Island after Franklin and his men perished.

When Schimnowski heard Kogvik’s story, he didn’t dismiss it, as Inuit testimony has been so often during the long search for Franklin’s ships.
Instead, the Bergmann’s crew agreed to make a detour for Terror Bay on their way to join the main search group aboard the Canadian Coast Guard icebreaker CCGS Sir Wilfrid Laurier and the Royal Canadian Navy’s HMCS Shawinigan, at the north end of Victoria Strait.
That is where the only known record of the Franklin expedition provided coordinates for what experts now call the point of abandonment.
A scrawled note dated 25 April 1848, and concealed in a stone cairn at Victory Point on northern King William Island, said Erebus and Terror had been abandoned three days earlier, stuck in sea ice.
Crozier was in command of “the officers and crews, consisting of 105 souls”, because Franklin had died on 11 June 1847, the note continued, “and the total loss by deaths in the expedition has been to this date 9 officers and 15 men”.
Crozier and Captain James Fitzjames signed the note, which had what seemed a hurried postscript, scrawled upside down in the top right corner: “and start on to-morrow 26th for Back’s Fish River”.
Survivors apparently hoped to follow the river – now known as Back river – south to safety at a Hudson’s Bay Company fur trading outpost.
None made it, and for generations, the accepted historical narrative has described a brutal death march as the Royal Navy mariners tried to walk out of the Arctic, dying along the way.
Now Franklin experts will have to debate whether at least some of the dying sailors instead mustered incredible strength, fighting off hunger, disease and frostbite, in a desperate attempt to sail home.