As far as spoofing incidents are concerned, the answer is signal authentication.
Europe’s Galileo program wants to be the first to offer this basic GNSS security measure to the masses.
Galileo has started testing its Open Service Navigation Message Authentication (OSNMA)
This is the first-ever transmission of authentication features in open GNSS signals.
It enables to verify the authenticity of GNSS information
From EC

Galileo has started testing Open Service Navigation Message Authentication (OSNMA) in the signal-in-space, allowing the first-ever OSNMA-protected position fix to be successfully computed.
Testing will continue over the next months, ahead of a so-called “public observation” phase.
This is the first-ever transmission of authentication features in open GNSS signals of a global navigation system.

The Galileo OSNMA is an authentication mechanism that allows GNSS receivers to verify the authenticity of GNSS information, making sure that the data they receive are indeed from Galileo and have not been modified in any way. 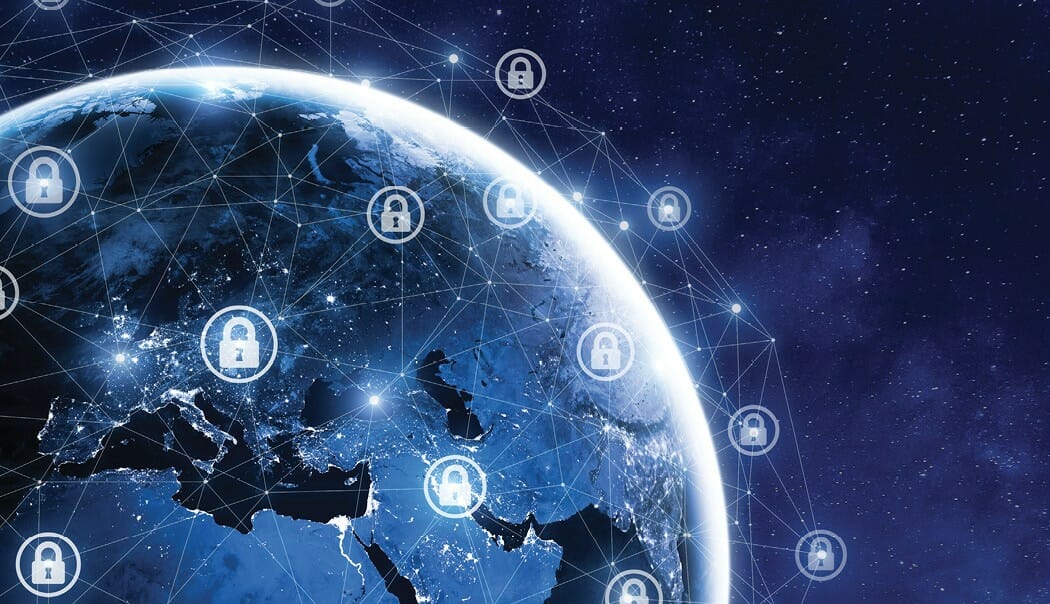 On November 18th 2020, 15:28 UTC, Galileo satellites started the transmission of authentication data for testing purposes.
This was the first-ever signal-in-space (SIS) with the so-called OSNMA, Galileo’s data authentication service.
As part of the tests, OSNMA receivers successfully calculated a message-authenticated position for the first time.

“Ensuring the validity of positions elaborated by GNSS is one of the main challenges before addressing an entirely new set of applications demanding dependability and resilience. Galileo is now set on course to deliver on this highly anticipated feature and has many more novel features in store for the coming years”, says Matthias Petschke, Director of Space at the European Commission, DG DEFIS. 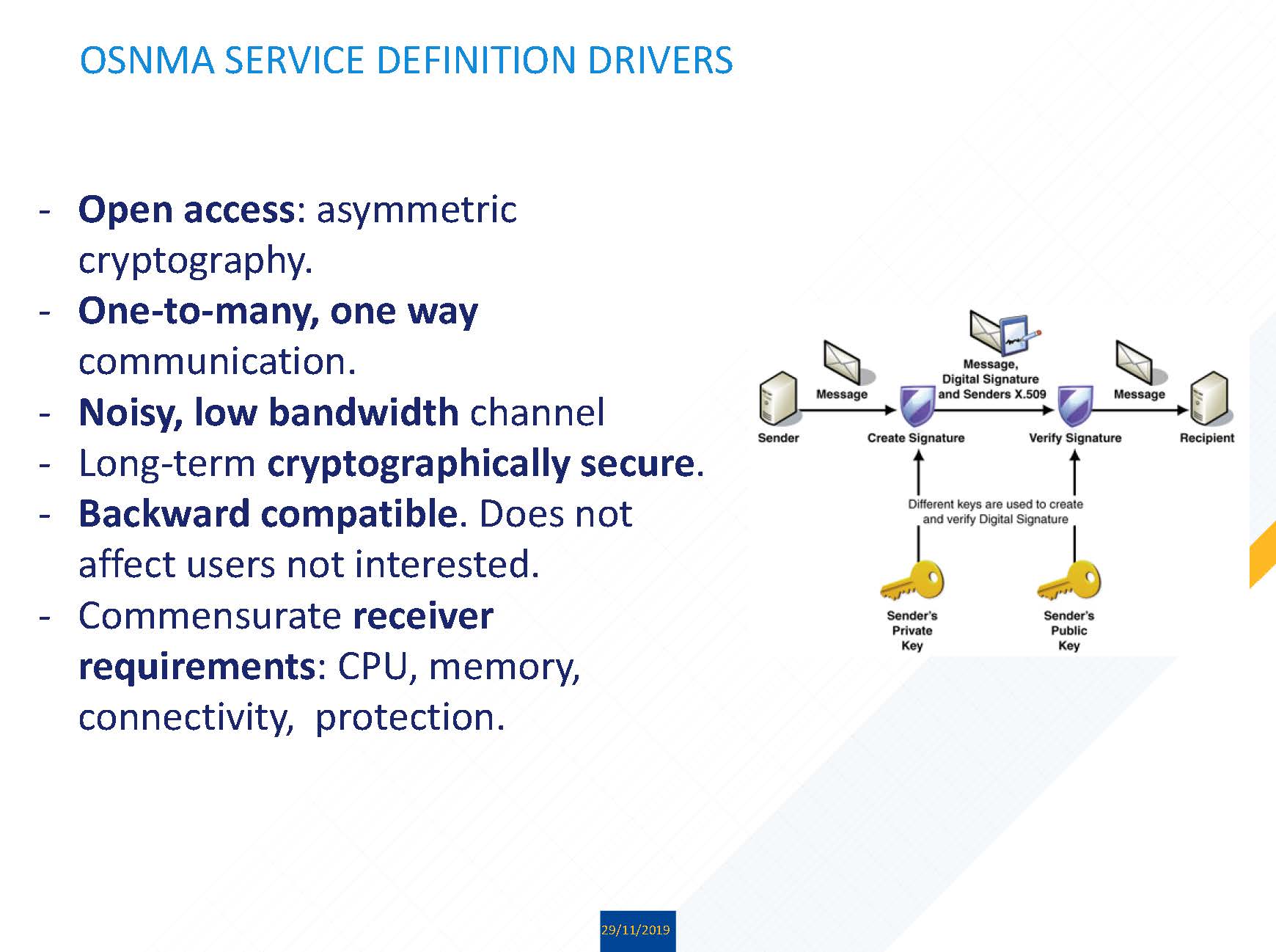 “Galileo’s Open Service Navigation Message Authentication is one of its key differentiators.
The additional robustness that it will provide to the Galileo signal will be critical for many applications, particularly those where security and trustworthiness are a priority, making the OSNMA a key component in any resilient PNT solution”, says Rodrigo da Costa, Executive Director of the European GNSS Agency.

“Up until now, as a navigation satellite disseminates navigation and timing data, there is no way of confirming these data are indeed coming from their apparent originator.
As a result, the data could be falsified, a phenomenon known as spoofing, where corrupt false signals mislead receivers about their position, misleading their users in turn, with potentially serious consequences”, comments Paul Verhoef, Director of Navigation at the European Space Agency.

The first tests used eight Galileo satellites for around two hours on November 18th. Tests have continued ever since, for intermittent periods, and will continue over the next months.

Upon successful completion of the internal testing phase, a public observation phase will begin, in which the OSNMA signal will be publicly accessible. 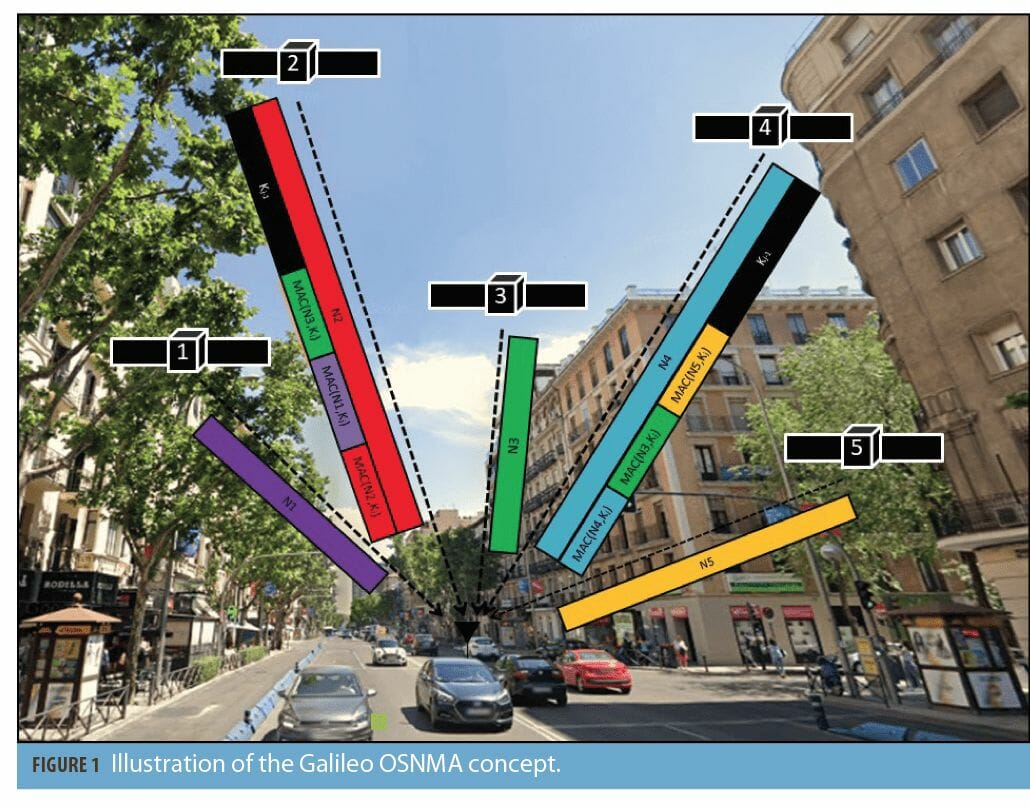 In preparation of this phase, the OSNMA user Signal-In-Space Interface Control Document (OSNMA SIS ICD), receiver implementation guidelines, and the necessary cryptographic materials will be published.
This will allow receiver manufacturers and application developers to test and prepare their products.

During the public observation phase, feedback will be gathered from users, leading to the consolidation of the service.
Links :
Posted by geogarage at 1:22 AM