What if Greece extends its Territorial Waters to 12 Miles in the Aegean?


From GreekReporter by Tasos Kokkinidis

Former Foreign Minister Nikos Kotzias made a final announcement in October as he handed the ministry’s portfolio to Alexis Tsipras.
He said Greece is ready to extend its territorial waters from 6 to 12 nautical miles.

In the first stage, he said, Greece will expand its sovereignty towards the west from the Diapontia Islands, a cluster of small islands in the Ionian Sea, to Antikythera, an island lying between the Peloponnese and Crete.
But the plan is to also do the same in the Aegean.

Kotzias said that the move constitutes the “first extension of the country’s sovereignty since the Dodecanese became part of Greece in 1947.”
Extension in the Ionian is unlikely to cause any objections from its neighbors Italy and Albania.

But, the Aegean is a different proposition altogether.
Turkey has threatened in the past that such a move, which it says in effect turns the Aegean into a Greek lake, is a cause of war (casus belli). 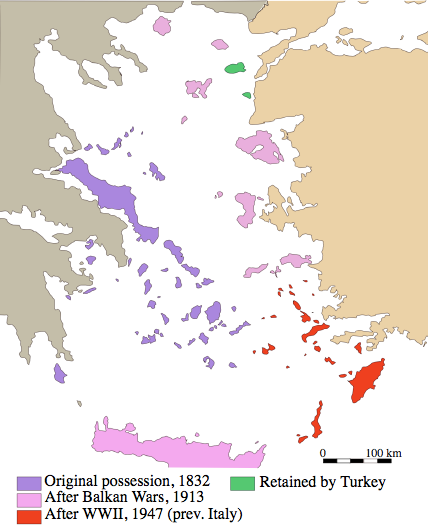 Map of the Aegean islands, indicating date of incorporation into Greece.

Law of the Sea

Territorial waters are an extension to the sea of the national sovereignty of a country beyond its shores.
They are considered to be part of the country’s national territory.

They give the littoral state full control over air navigation in the airspace above, and partial control over shipping, although foreign ships (both civil and military) are normally guaranteed innocent passage through territorial waters.

Greece has a legal right to extend its territorial sea to 12 nautical miles, as provided for by the United Nations Convention on the Law of the Sea.

Virtually all coastal states abide by the Law of the Sea, including Turkey, which since 1964 has expanded its territorial waters in the Black Sea and the Mediterranean to 12 nautical miles.

When ratifying the Convention, Greece tabled a statement declaring that “the time and place of exercising these rights … is a matter arising from its national strategy.”

Successive Greek governments refrained from exercising this legal right.
Six nautical miles have been in force since 1936, and since then there has been a continuing debate on whether Greece should extend to 12 nautical miles. If Greece extends its territorial waters in the Aegean, it will increase its control from the current 43 percent to 71 percent.
International waters will be reduced from 49 percent to less than 20 percent. (see maps above)

This is why Turkey has threatened war.
It claims that the Aegean is a special case and if the provisions of the Law of the Sea are applied, Turkey will be cut off from the Sea.

Imia, the two small rocky islands that lie in the Aegean Sea and have been a source of dispute between the two nations in 1996.
At the back, the Small Imia and on the front of the picture Big Imia.

Localization of th tiny barren islets of Imia/Kardak, situated between the Dodecanese island chain and the Turkish mainland 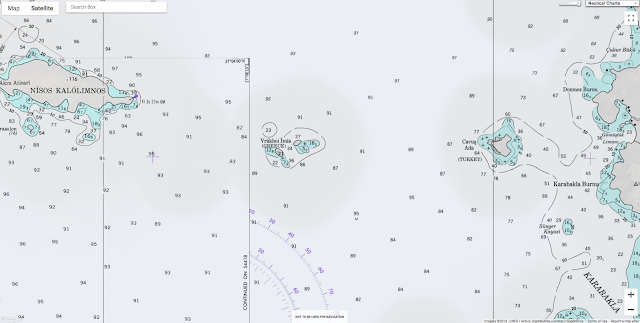 ICAO map, 1955
source : HRI
Greece rejects Turkey’s arguments saying that under the Law of the Sea the right of passage is fully safeguarded and even expanded.
By making use of these rights, even warships from other countries can move undisturbed from Greek territorial waters and through narrow passages between the islands, as is done today.

Tensions over the 12-mile question ran highest between the two countries in the early 1990s, when the Law of the Sea was going to come into force.
On 9 June 1995, the Turkish parliament officially declared that unilateral action by Greece would constitute a casus belli.

This declaration has been condemned by Greece as a violation of the Charter of the United Nations, which forbids “the threat or use of force against the territorial integrity or political independence of any state”.