The Copernicus Sentinel-1 mission has imaged the oil spill in the Mediterranean following a collision between two merchant ships on Sunday 7 October 2018.
A Tunisian cargo ship is reported to have struck the hull of a Cypriot container ship in waters north of the French island of Corsica.
There were no casualties, but the collision caused a fuel leak – which has resulted in an oil slick about 20 km long.
Although the collision occurred in French waters, the cleanup operation is part of a joint pact between France, Italy and Monaco to address pollution accidents in the Mediterranean.
This image of the slick, which can be seen as a dark patch north of the tip of Corsica, was captured by the Sentinel-1A satellite today at 05:28 GMT (07:28 CEST).
Sentinel-1 is a two-satellite constellation built for the European Commission’s Copernicus environmental monitoring programme. The identical satellites each carry an advanced radar instrument that can ‘see’ through the dark and through clouds.
Its wide swath allows large areas of Earth’s surface to be imaged so that events such as this can be detected and monitored easily.
Sentinel-1 images are used by the European Maritime Safety Agency as part of CleanSeaNet, the European satellite-based oil spill and vessel detection service.
Note: other dark areas show patterns featuring low reflectivity of the radar signal, for instance very calm waters.


From DailyMail by Henry Martin 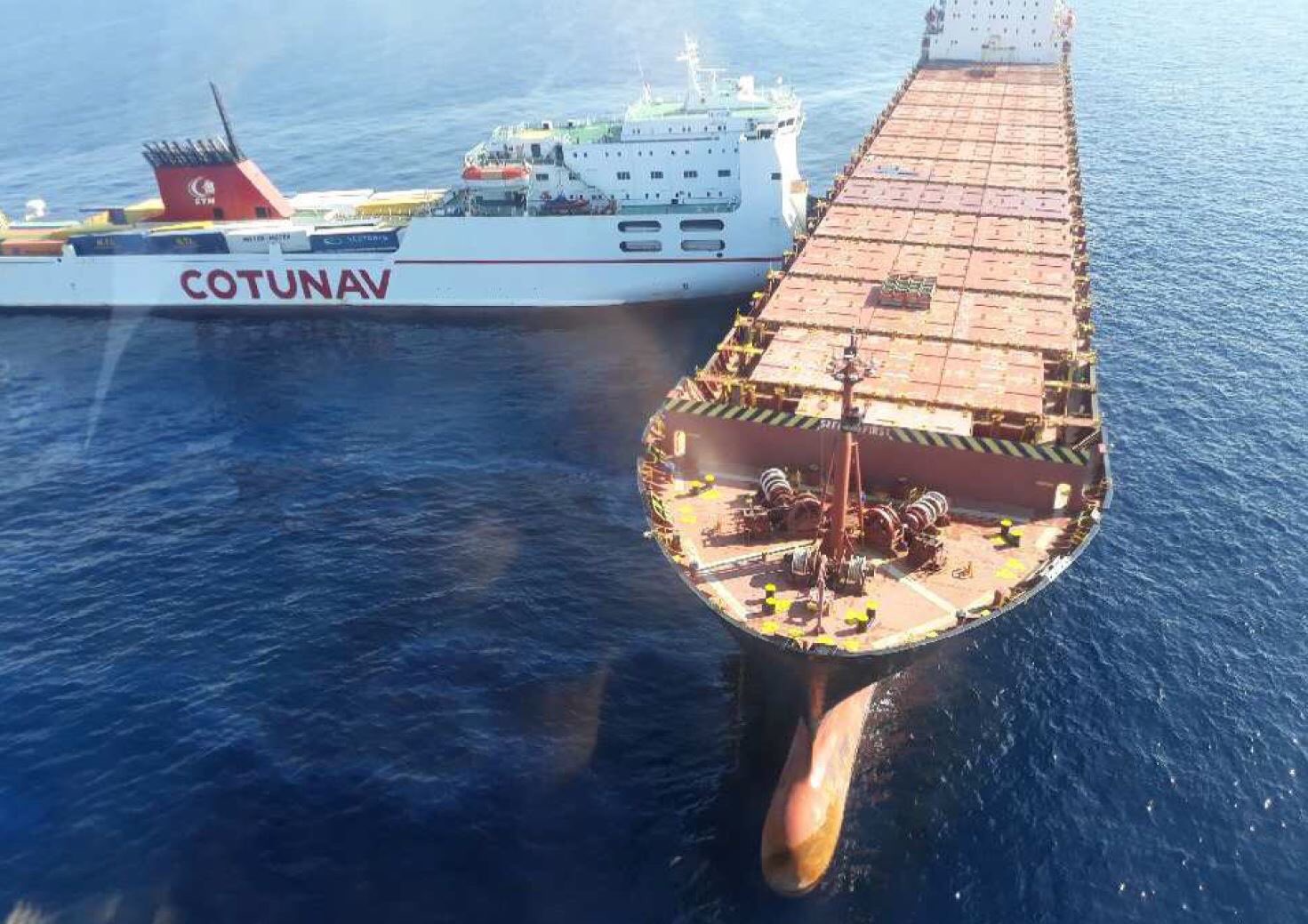 French and Italian maritime authorities have begun cleaning up a fuel spill that has spread 12.5 miles in the Mediterranean Sea after two cargo ships collided north of the island of Corsica. 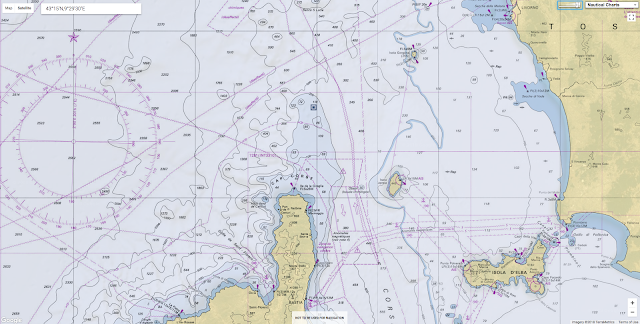 The incident occurred early Sunday when The Ulysse, a Tunisian freighter operated by CTN, rammed into a Cyprus-based CLS Virginia, which was anchored about 20 miles off the northern tip of the French island and not carrying any cargo.

The ship's hull was pierced and at least one fuel tank began leaking into the sea off the holiday island of Corsica.

Italy's coast guard said yesterday it is recovering some of the polluted material and monitoring the spill amid changing weather conditions.

According to the CTN's published shipping schedule, the Ulysse was travelling from Genoa in Italy to the Tunisian port at Rades near Tunis.

French Environment Minister Francois de Rugy said some 600 tonnes of propulsion fuel had spilled into the sea.
He condemned the 'abnormal behaviour' of the Tunisian ship in a press briefing at Corsica's Bastia airport after surveying the affected area by helicopter.

Officers of France's paramilitary gendarme police force had been airlifted to the ships to investigate the incident, but it was too early to say what had happened, he added. 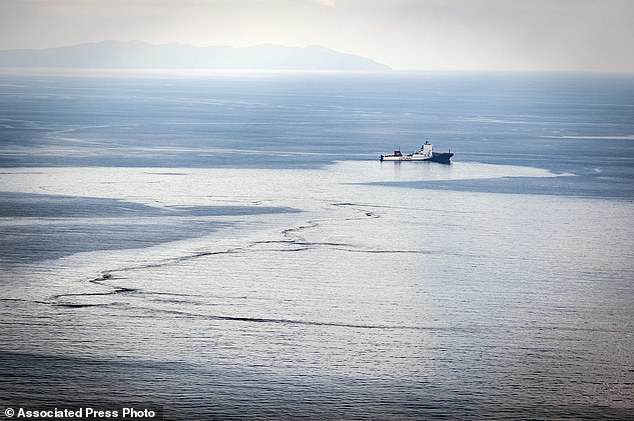 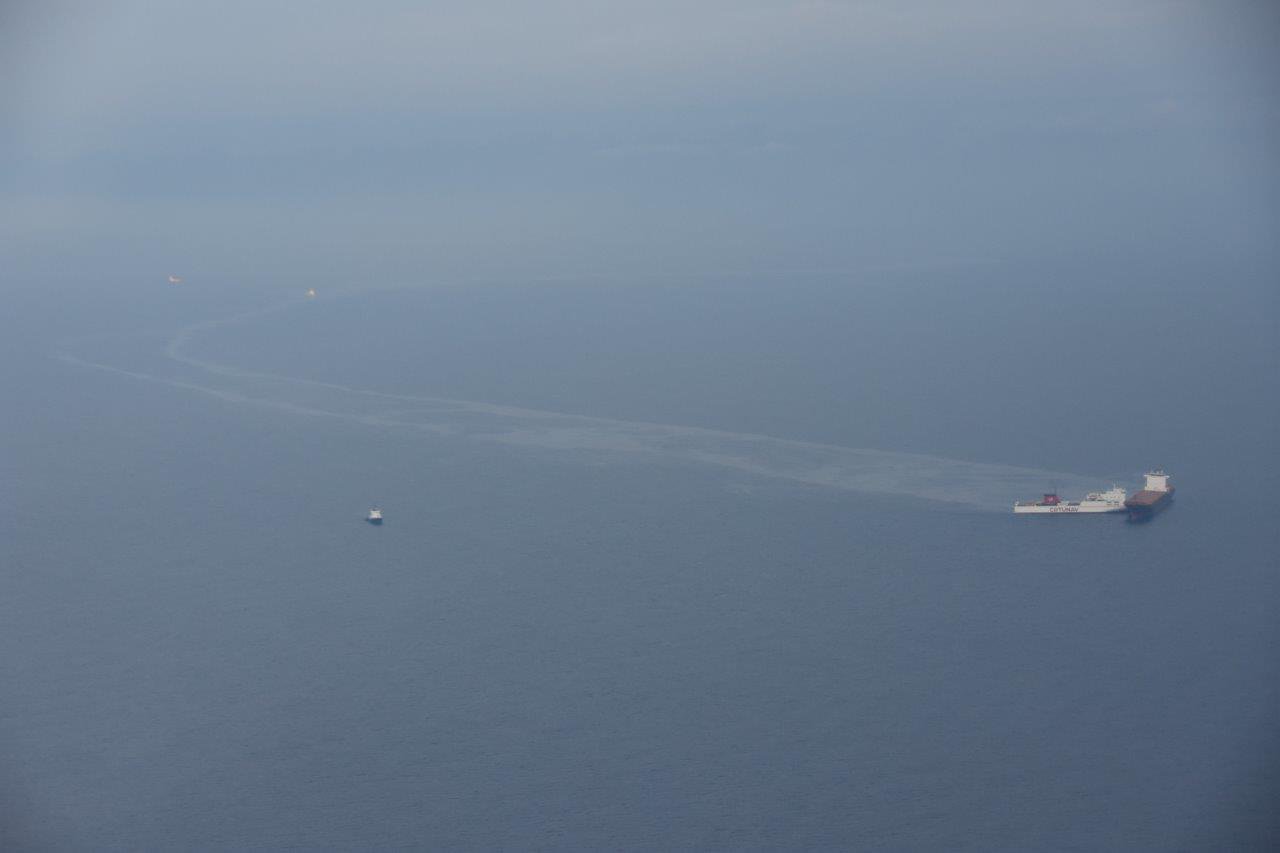 Italian anti-pollution vessels have begun pumping the slick, Rugy said, adding that while the collision occurred near the Cap Corse marine reserve, the spill remained outside the park and moving away from Corsica.
The island is known for its pristine waters and beaches. 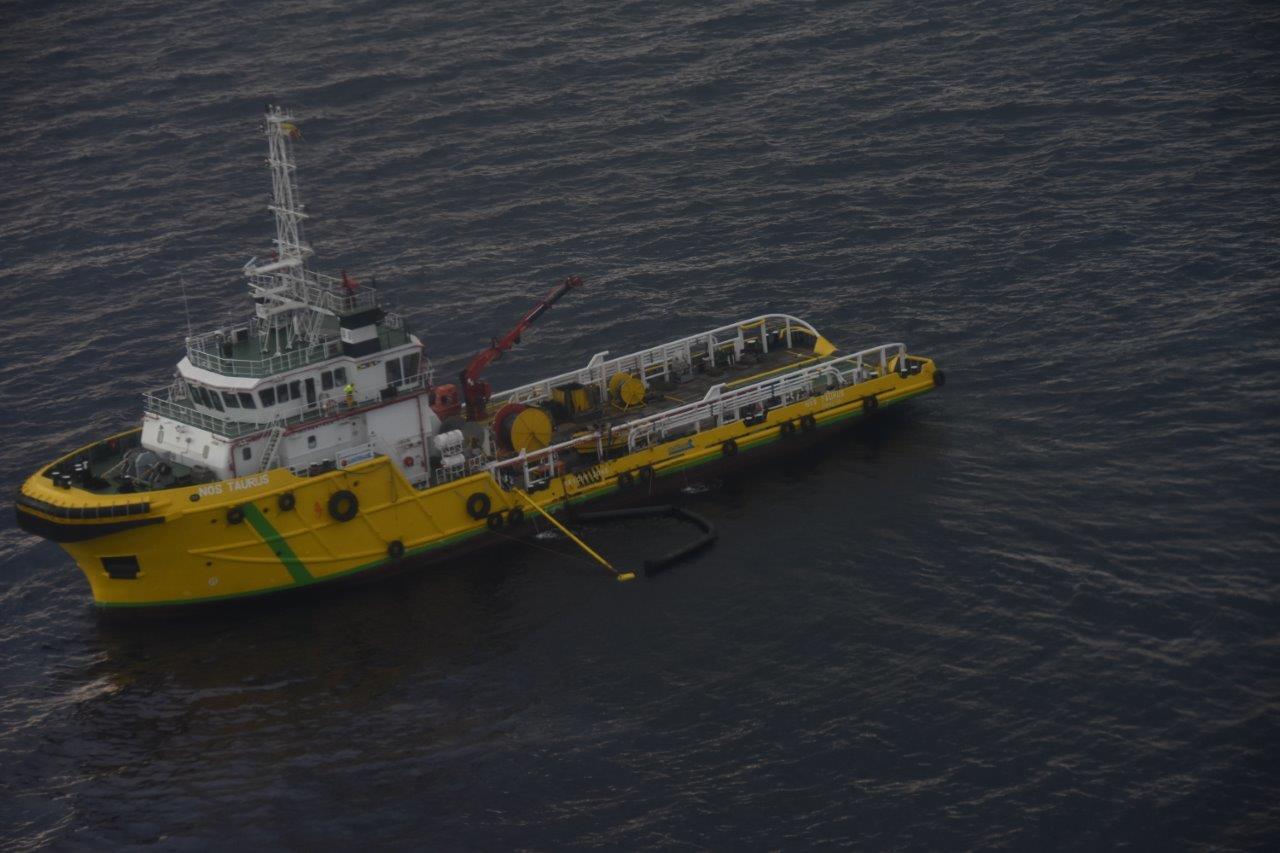 Aerial views of the area by Falcon 50 @NationalMarine this morning.
French and Italian resources (including Italian tugboat Our Taurus in photo) on site to start treating pollution ribbon.
Credits ©National Navy

'All means are mobilised, civil and military teams, French and Italian are working hard and doing everything so that this accident does not have ecological consequences,' he said.
'The first priority is to extricate the two boats,' Rugy said, adding the operation was 'very complicated', with the Tunisian boat wedged into the Cyprus-based CLS Virginia.

A criminal investigation has been launched for 'pollution' brought on by a 'maritime accident', Marseille prosecutor Xavier Tarabeux said. 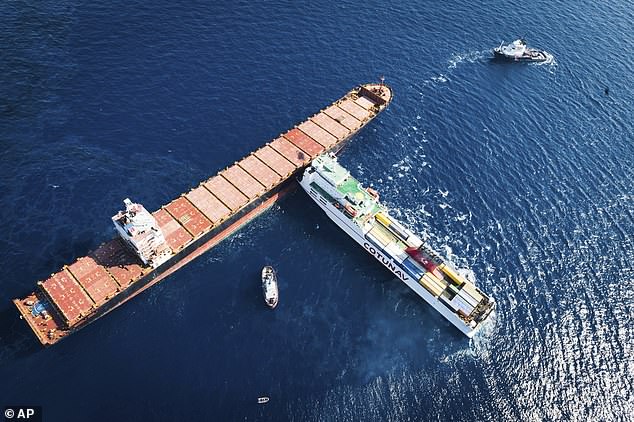 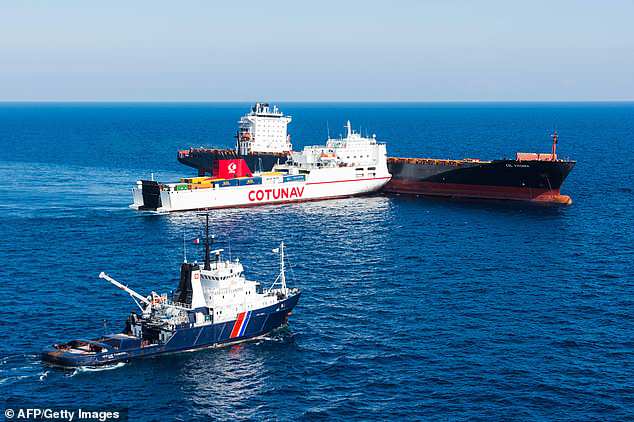 Writing on Twitter, Corsica leader Gilles Simeoni said earlier he was determined to find what caused the accident, which occurred in relatively calm seas with good visibility.
Posted by geogarage at 5:09 PM