His Pacific Island was swallowed by rising seas. So he moved to a new one. 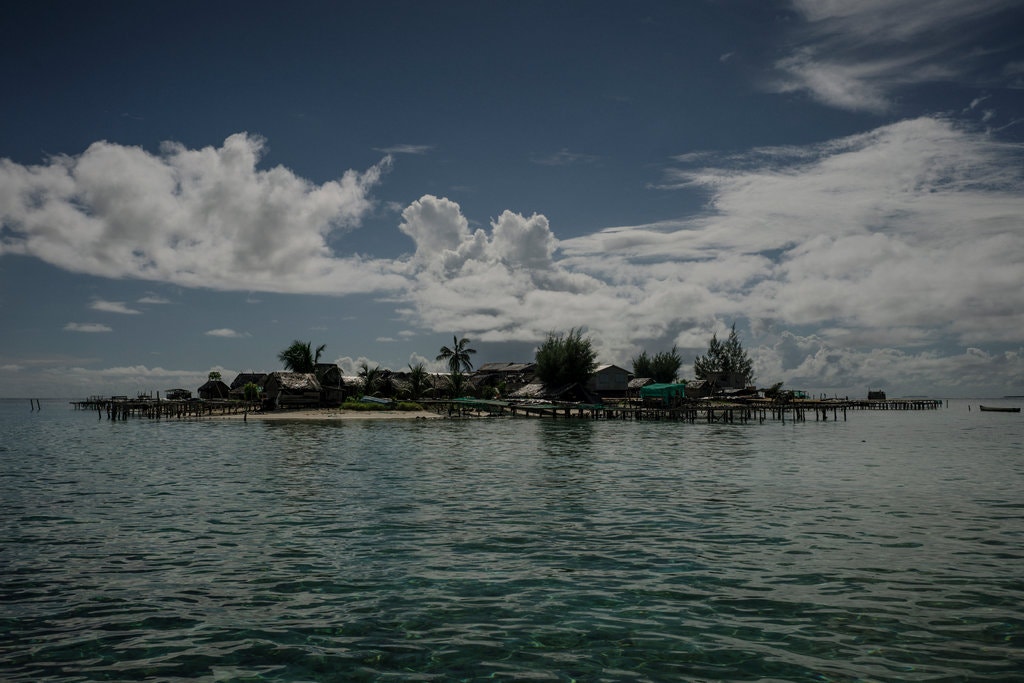 Beniamina Island, part of the Solomon Islands.
Credit : Adam Ferguson for The New York Times
From NYTimes by Damien Cave

“It used to be right there,” he told me, pointing east to what simply looked like more ocean.
“We thought everything was going to be O.K., but it’s getting very hard.”

The spit of earth he currently occupies here in this remote stretch of the South Pacific is half the size it was when he arrived five years ago.
At mid-tide, it’s 24 steps across at its widest point, and 58 steps long (by my own walking count).

At high tide it’s even smaller, a teardrop of sand and coral with just enough room for his family and a few tons of the seaweed they grow offshore.

The sea has almost reached the heart of Beniamina Island.

It’s that seaweed that keeps them here.
The shallows near his island — and two others nearby that have also been settled by farming families — are perfect for a wiry breed that’s exported across Asia.
And Mr. Tebaubau, 50, a former mechanic with the calm voice and long beard of a sage, is especially adept at its cultivation.

His earnings have already sent his children to private school on a larger island.
To the neighboring seaweed farmers, he is not just a recluse.
He is The Seaweed King.
At least for as long as he has a kingdom. 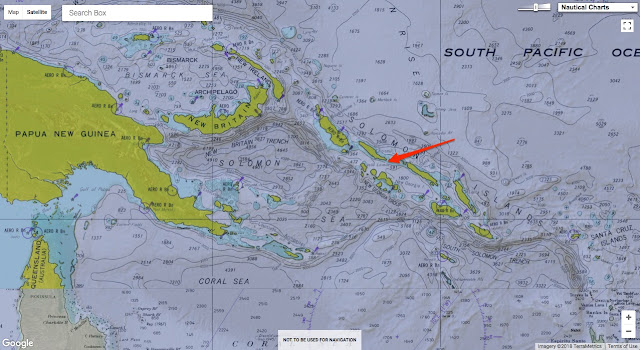 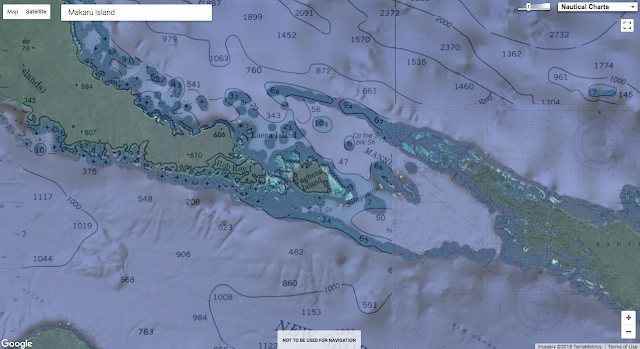 All three of the sandy islands here are being swept away by powerful currents and a rising ocean caused by climate change.
Precarious and precious, life here is lovely, tropical and calm, but also akin to living in a bathtub with warm water pouring in and no drain to let it out.
Ever.

It’s what you see in many parts of the Solomon Islands, a struggling, stunning country of around 900 islands and 570,000 people.

Scientists call it a global hot spot.
The surrounding seas have risen about 7 to 10 millimeters per year since 1993, roughly three times today’s global average — and what scientists expect across much of the Pacific by the second half of this century. 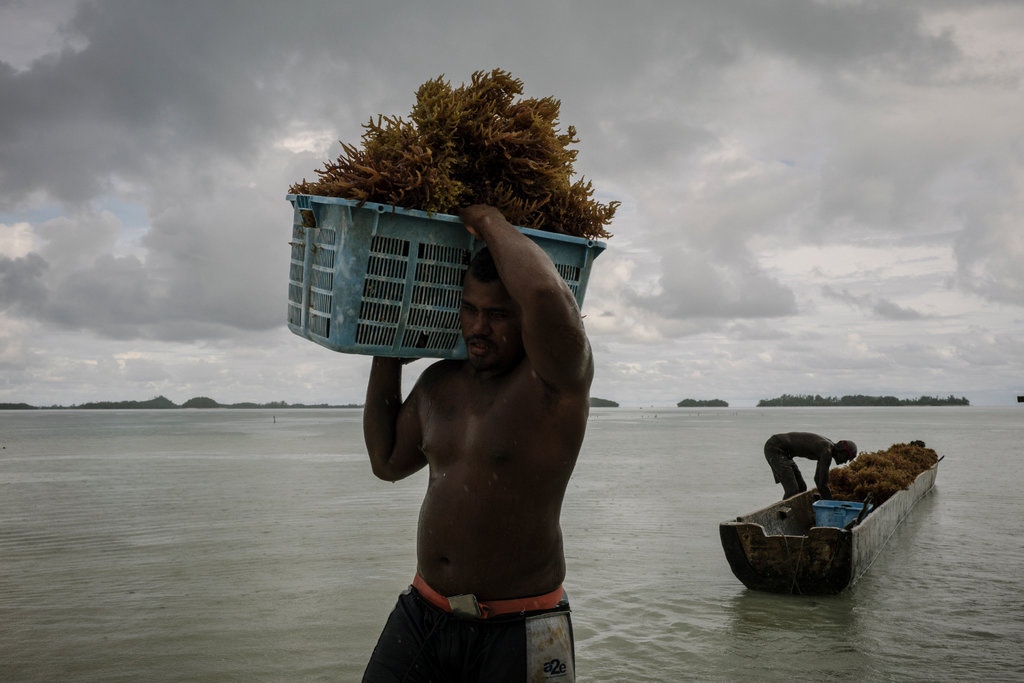 Unloading seaweed after harvesting it near Beniamina Island.
Credit Adam Ferguson for The New York Times 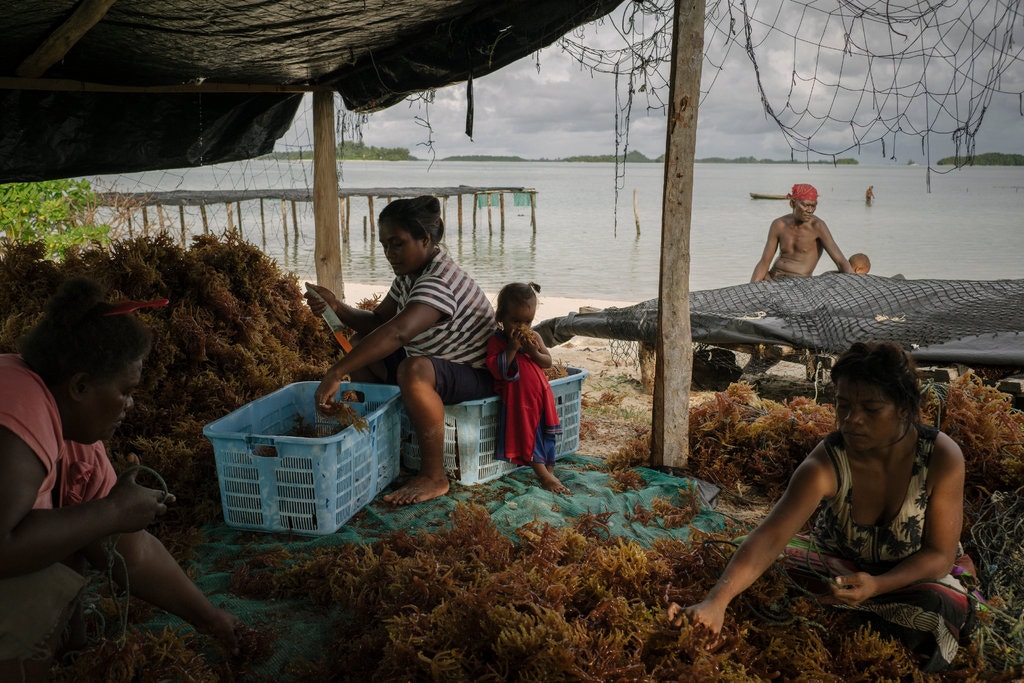 Confronting such extremes, residents of many small villages on various islands have picked up and moved.
Others, especially here on the three islands surrounded by lush seaweed, are doing everything they can to stay.

“People talk about these islands being vulnerable, and along with that they tend to treat the human beings as vulnerable, too,” said Simon Albert, a researcher at the University of Queensland in Australia who has written several papers on adaptation to climate change in the Pacific.
“But in my view, they’re the opposite — they’re strong and resilient.”

Maybe they’re a bit stubborn, too — but with cause.

The families here are the children and grandchildren of migrants resettled by the British in the 1950s after their islands elsewhere in the Pacific suffered from extreme drought.

They’re not eager to move again.

“They call us crazy for staying, but we just survive, ourselves,” said Andrew Nakuau, 55, a farmer and community leader on Beniamina, where about 60 people live crammed together on an island no more than a few hundred meters wide.

We were meeting at its center, in a small church at Beniamina’s peak — shin-high from the sea.
I could see Makaru a short boat ride away.

Small solar panels the size of a notebook shimmered on the roofs of the thatch-and-wooden homes clustered nearby.
Washbins and buckets for rainwater, the only freshwater available, lined the island’s pathways, thirsty for a storm.

I asked Mr. Nakuau what it felt like to be so disconnected from the causes of climate change, with its cars and coal, but so close to its effects.
He shrugged and walked me over to his own line of defense. 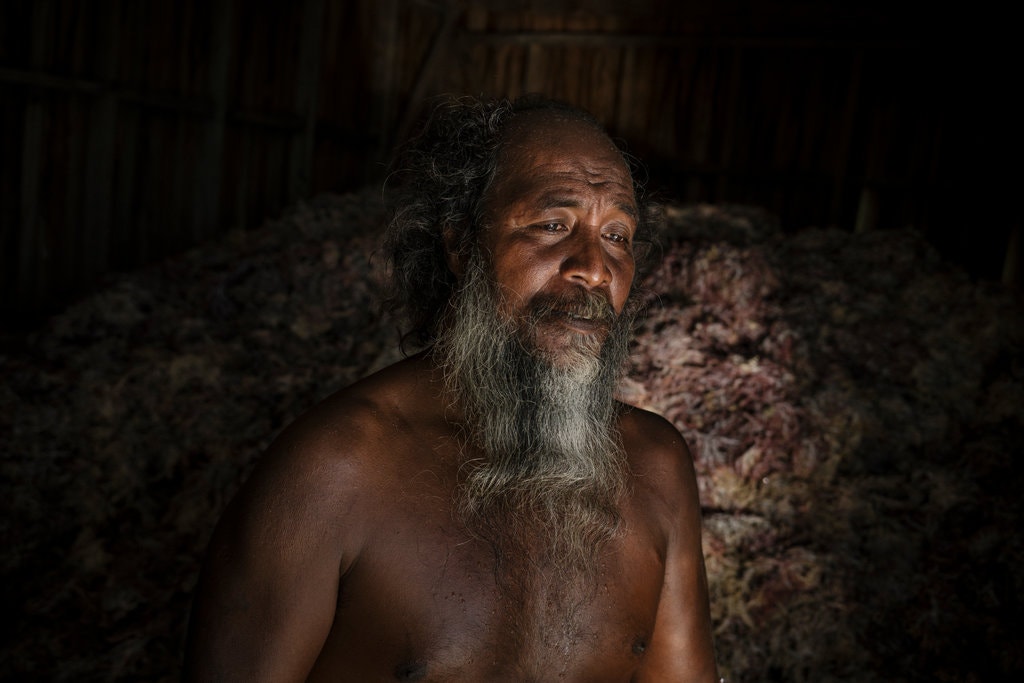 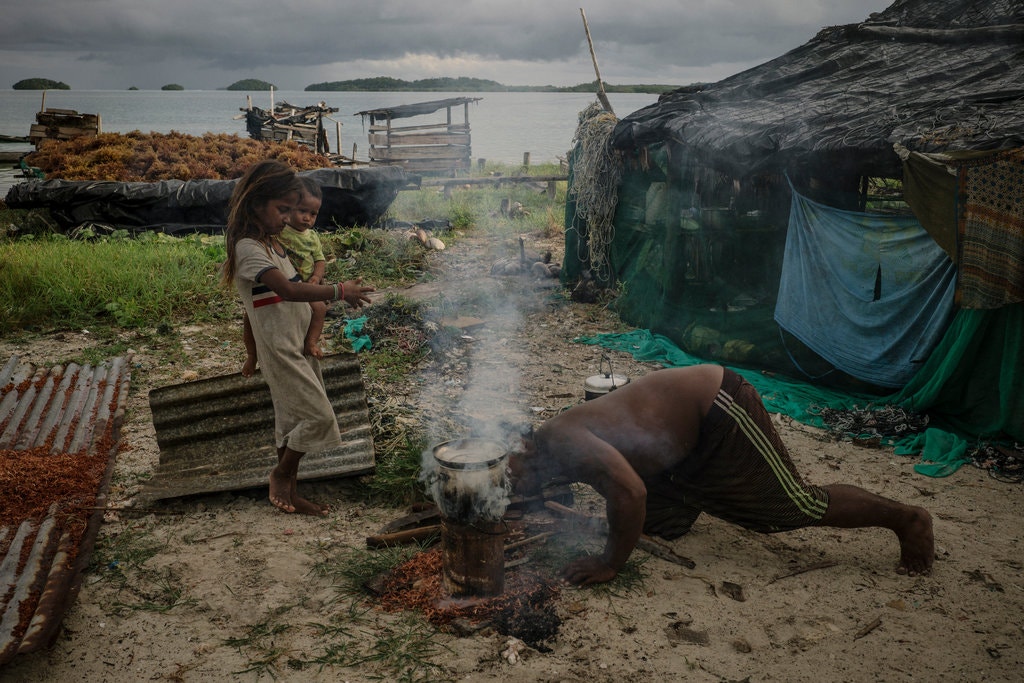 To the left of an outhouse dangling over teal blue water, which used to be land, he pointed to a pile of coral rising several feet from the sand.
It was held in place with wooden beams.

“This is the second wall I’ve built,” he said.
“The first one was four years ago.”

He has also added a second floor to his home.

When I saw a DVD player there, I asked if he had a favorite.
“Rambo,” he said.

A few hours later, low tide, and work, returned.
Most of the young men from the islands could be seen out in the water, piling seaweed into dugout canoes, or tying seedlings to underwater ropes.

It was hot, equatorial hot, even in the water.
When a thunderstorm rolled in, the men quickly moved their catch under tarps to protect it.

Under one tent on Beniamina, nearly a dozen women were working together, laughing and chatting as the men carried seaweed in and children splashed nearby in the rain.

Asked about the toughest part of living on the island, the women struggled for answers.
“It’s easier to get to know each other here,” said Rakeua Angela, 58, a mother of six. 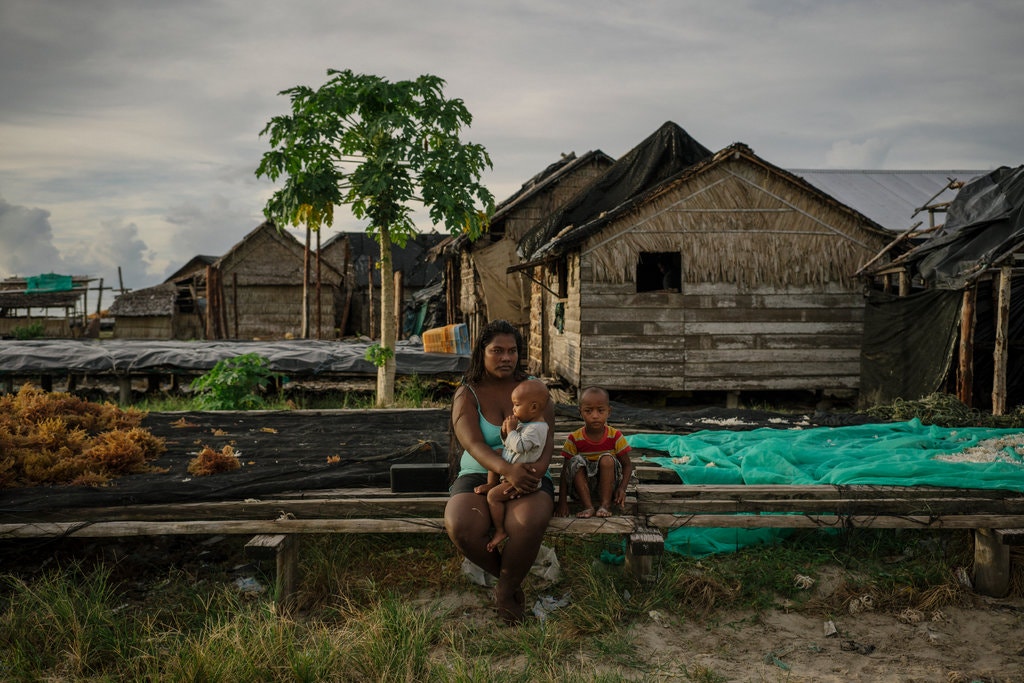 The families on Beniamina Island are the children and grandchildren of migrants resettled by the British in the 1950s after their islands elsewhere in the Pacific suffered from extreme drought.
Credit Adam Ferguson for The New York Times

Rarely, all agreed, does anyone cause trouble.
Even drinking alcohol is against the rules; 20 lashes on the rear-end is the punishment, last meted out about a year ago, Mr. Nakuau said, to eight boys and two girls caught in a not-so-distant corner of their very small island.

Cross-sea marriages are common (three of Mr. Tebaubau’s children married into Beniamina families) and recreation is communal — bingo nights for women around once a week, birthdays celebrated by all and, at dusk on most days, volleyball and music on Beniamina.

The games are competitive, but joyful with a soundtrack moving from hip-hop to Abba.
Watching the island’s teenagers play during one particularly glorious evening, it was almost possible to believe that life here could continue forever, undisturbed.

Except that in the distance were the dead gray trees that used to be on land, and the dark blue waves, crashing on the reef.

None of the islanders, especially not the Seaweed King, seemed to notice.
When we returned to Makaru, Mr. Tebaubau happily showed me his warehouse with the seaweed he planned to sell next.
“I don’t intend to move,” he said.
“Here there’s no boss, you’re the boss.”

His children were out.
His own wall of coral stood tall.
“We’ll keep trying,” he said, “trying to stand.”

Except for a few growling dogs, he was completely alone, tilting at the windmill of rising seas. 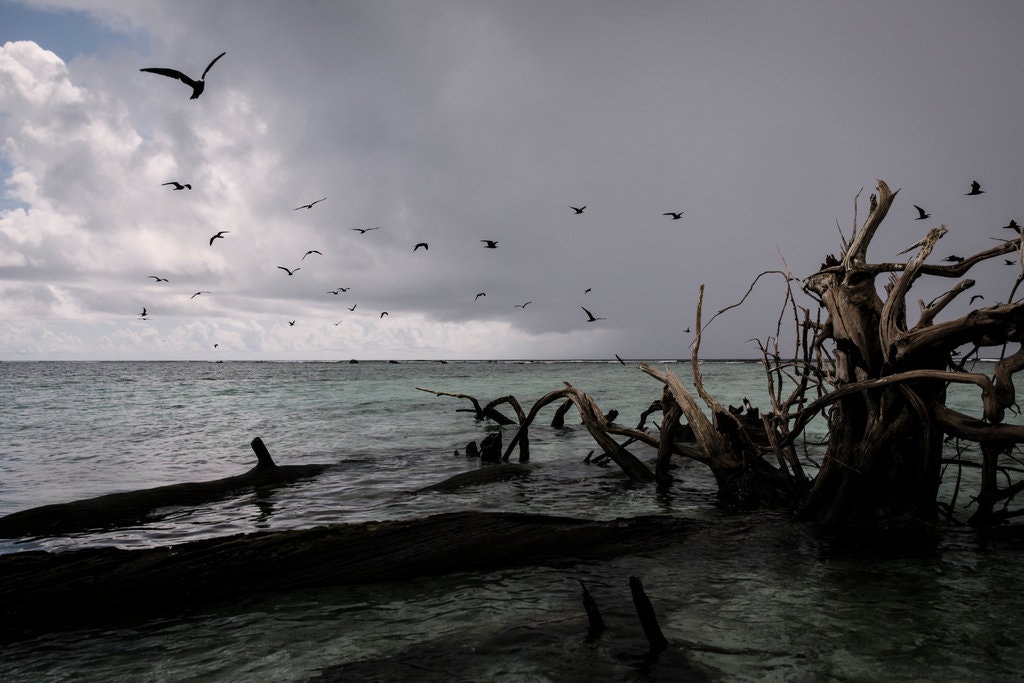 The remains of a fallen tree in an area formerly dry and inhabited, near Tetongo Island.
Credit Adam Ferguson for The New York Times 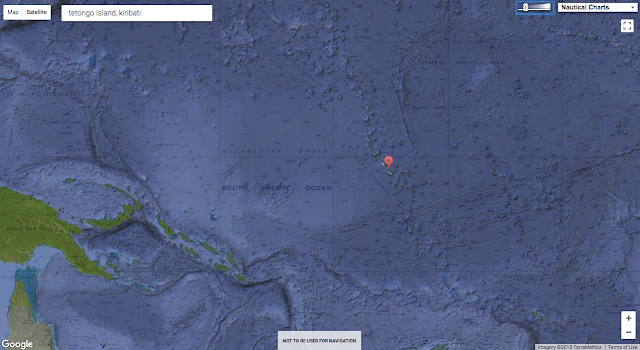