The yellow submarine named Boaty McBoatface is set to leave for Antarctica this week on its first science expedition.
The robot is going to map the movement of deep waters that play a critical role in regulating Earth's climate.
Boaty carries the name that a public poll had suggested be given to the UK's future £200m polar research vessel.
The government felt this would be inappropriate and directed the humorous moniker go on a submersible instead.
But what many people may not realise is that there is actually more than one Boaty.
The name covers a trio of vehicles in the new Autosub Long Range class of underwater robots developed at Southampton's National Oceanography Centre (NOC).
These machines can all be configured slightly differently depending on the science tasks they are given. The one that will initiate the "adventures of Boaty" will head out of Punta Arenas, Chile, on Friday aboard Britain's current polar ship, the RRS James Clark Ross.
The JCR will drop the sub into a narrow, jagged, 3,500m-deep gap in an underwater ridge that extends northeast of the Antarctic Peninsula.
Referred to as the Orkney Passage, this is the gateway into the Atlantic for much of the "bottom-water" that is created as sea-ice grows on the margins of the White Continent.
Frozen floes will cool and densify the water immediately below them, and this then generates a current that slides into the abyss to eventually move northwards.
And in traversing the Orkney Passage, the bottom-water can feed the "great ocean conveyor" - the relentless system of deep circulation that helps redistribute all the heat energy that has built up in the climate system.
Boaty's mission will be to survey conditions in the passage.
Scientific moorings anchored in the area already gather some data, but the robot's mobility and autonomy means it can now build a full, three-dimensional picture of what's happening many hundred of metres below the surface. 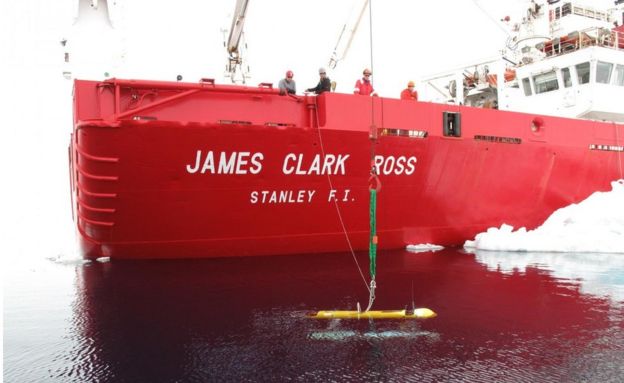 Scientists have good evidence that the bottom-water is warming.
Quite why is not clear but it could have major implications, says Prof Mike Meredith from the British Antarctic Survey (BAS).
"One of these is sea-level rise because if you make water warmer obviously it expands and that pushes the sea level up," he told BBC News.
"But it also has relevance for benthic ecosystems. So, the animals that live on the seabed can typically cope well with low temperatures but not all of them can cope with changes in temperatures. The fact that this water has been getting warmer may have significant consequences for these animals." 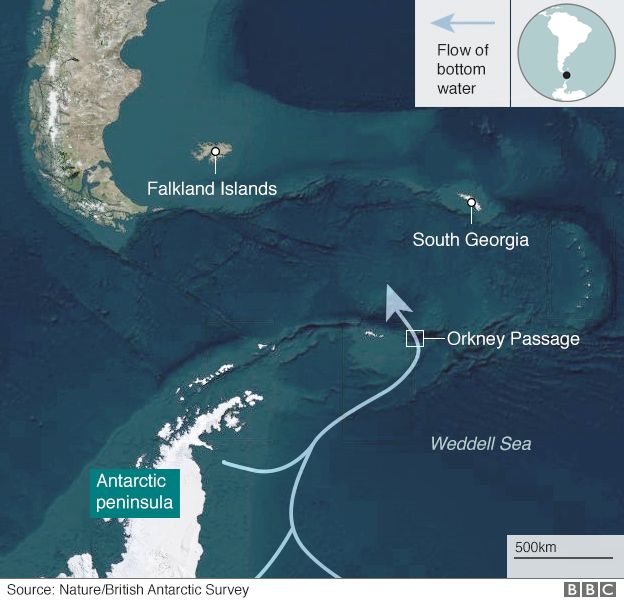 The recorded warming could be the result of a change in the way the deep current is moving through the passage.
If there is greater turbulence as the bottom-water flows over the jagged terrain, it might be mixing more warm water downwards.
Boaty will have a probe on its nose to assess this.
"There are 'rapids' and 'waterfalls' that are occurring within the channels and valleys that surround underwater mountains in the passage," explained Dr Eleanor Frajka-Williams from Southampton University.
"Boaty is going to make measurements within these 'streams' and 'rivers' of the smallest-scale motions to try to understand how that water is being changed as it leaves the formation regions around Antarctica and then spreads out over the world's oceans." 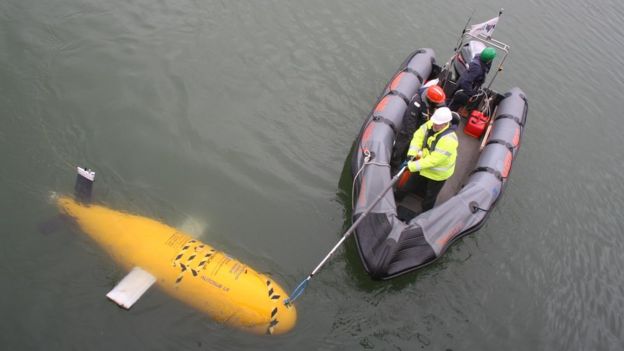 And while this particular robot is hard at work in the Southern Ocean, its two siblings back in Southampton are being prepared for their own expeditions.
Scientists are queuing up to use them, and to exploit their ability to autonomously patrol the oceans for weeks, even months, on end.
"Having three Boaty vehicles in the fleet means we can cover a much wider range of environments and geographic locations than we could with just one," said NOC's Prof Russell Wynn.
"So, one vehicle might be going out to Antarctica and surveying around and under the ice; another might be going to the deepest parts of the ocean, down to 6km; and another might be doing something more applied in, for example, the North Sea.
"We're getting lots of proposals and it's great that we can meet that demand," he told BBC News.
The Dynamics of the Orkney Passage Outflow (DynOPO) expedition is a collaboration between BAS, the University of Southampton and NOC.