Until recently, global maps of coral reefs had not changed much since the days of Charles Darwin.
The British scientist created some of the first maps in the 1840s, including observations from his ocean expeditions.
French scientist Louis Joubin updated those maps in 1912, adding information from letters he received from people living near reefs around the world. But it was not until the beginning of the 21st century that coral reef mapping caught up with modern technology.
It took the arrival of a high-quality satellite camera—the Enhanced Thematic Mapper Plus on Landsat 7—and a convincing argument.
The Landsat series of satellites was originally created to observe landforms, so imagers on Landsat 1 through 5 were typically turned off while flying over large oceans in order to conserve power or limited data storage.
Ocean researchers eventually made the case to turn the instrument on over coastal waters and, occasionally, the open ocean. 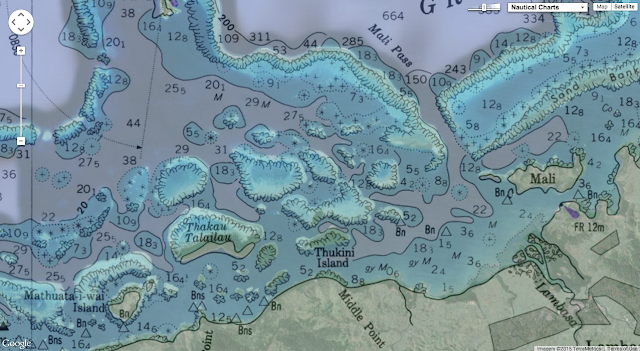 From 2000 to 2003, scientists participating in the Millennium Global Coral Reef Mapping project collected and analyzed 1,724 Landsat 7 satellite images in order to create a uniform, global map of coral reefs.
The map has since been distributed openly on the Internet and has been adopted by researchers and coral reef managers around the world.

Now the next generation of Earth-observing satellites is poised to significantly improve and update coral reef mapping.
The sensors aboard Landsat 8 were designed to have higher sensitivity to brightness and color than Landsat 7 (12-bit data versus 8-bit). Most significantly, the satellite can observe Earth in wavelengths that allows scientists to adjust for the distortions caused by the atmosphere near the coast (a new shortwave, ultra-blue band at 0.43-0.45 micrometers supplements the blue band at 0.45-0.51 micrometers).
This extra sensitivity has made it easier to spot coral reefs and to quantify their area and depth.
Scientists now have a tool for monitoring the health of coral reefs even in the most remote regions.

“The Operational Land Imager on Landsat 8 is allowing us to outline the reefs around the world and measure area and estimate depth in ways never possible before,” said Frank Muller-Karger, a professor of oceanography at the University of South Florida and a leader of the Landsat-coral mapping efforts.
Muller-Karger has been funded by NASA’s Applied Sciences to work together with the NOAA Coral Reef Watch program to develop new products for a coral reef alert program.
The large image and close-up above were acquired on May 10, 2015, by the OLI instrument on Landsat 8.
The images show the extensive coral reefs on the north shore of Vanua Levu, Fiji’s second largest island.
In addition to Landsat, Muller-Karger and colleagues can turn to several other satellites to measure conditions around reefs.
Satellite sensors like the Moderate-Resolution Imaging Spectroradiometer (MODIS) instruments aboard NASA’s Terra and Aqua satellites can sense ocean temperatures, a key variable in the healthy development of corals.
Similar readings are being collected by the Visible Infrared Imaging Radiometer Suite (VIIRS) instrument on Suomi NPP and the Advanced Very High Resolution Radiometer (AVHRR) instruments on NOAA’s Geostationary Operational Environmental Satellites.

The next big leap in coral studies may come from hyperspectral imaging.
New instruments tested on satellites, the International Space Station, and research aircraft have shown the potential to observe at more wavelengths and much better spatial resolution.
Such sensors might someday be able to spot minor variations in coral reef color—a sign of coral bleaching due to warming waters and changing ocean chemistry.
“You need Earth-observing cameras with small pixel sizes that allow a closer look at the corals. The scale needed is much less than 100 meters,” said Nima Pahlevan, a scientist at NASA’s Goddard Space Flight Center.
“With VIIRS and MODIS, for example, the best achievable spatial resolution is 250-500 meters We need instruments capable of resolving reefs at scales ranging from 1 to 40 meters.”