150 days of solitude on the high seas

14 years of dreaming, 3 years of hard work and 150 solitary days at sea - that is Sagarparikrama 2

On Nov. 1, 2012, Abhilash Tomy embarked on a five-month non-stop solo journey around the world.

In Mumbai, Mr. Tomy boarded a sailing yacht called “Mhadei,” and traveled 23,100 nautical miles (around 40,000 kilometers), brushing past the coasts of Australia, New Zealand, Chile, South Africa and the Maldives before returning to India.

Mr. Tomy, the first Indian to circumnavigate the globe alone and non-stop, arrived at Mumbai’s Gateway of India on March 31 after 150 days of travel.
An officer in the Indian Navy, Mr. Tomy celebrated his 34th birthday on the 56-foot long boat when he was sailing in the South Atlantic.
Mr. Tomy – who in the navy happens to be a pilot – is now planning to go on a long holiday.
“My body needs to recover,” he says.

In an interview with The Wall Street Journal, Mr. Tomy talks about reading philosophy, surviving cyclones, and his sense of loss at returning onshore. Edited excerpts.

The Wall Street Journal:  Did you always dream of sailing around the world solo?
Abhilash Tomy: I always dreamt of spending time at sea.
I grew up reading a lot of naval adventure, books of R.M. Ballantyne and Robert Louis Stevenson and people like that.
I always wanted to do something like this.

WSJ: What did your typical day look like?
Mr. Tomy: I’ll do my meditation by 6:00-6:30 a.m.
By 7 o’clock, I have my weather reports coming in.
I would pour over the weather charts for one or two hours.
At 8 o’ clock I would make my morning report and at 9 o’clock I had breakfast.
By 10, I walked around the boat to see what work I needed to attend during the day.
Then I planned out my work so that I could finish it all before sun set.

WSJ: How did you keep yourself busy during the journey?
Mr. Tomy: If I did have some free time, I would usually sleep.
You do a thirty minute sleep, then wake up, do a light reading, sleep again, check everything is O.K. and keep repeating the cycle.
It’s like that.
Other than that, I had a lot of books to read and I carried a lot of movies and all.
Then cooking would require a lot of time.
Working on the boat would take lot of my time.

WSJ: What kind of books and movies?
Mr. Tomy: ‘One Hundred Years of Solitude,’ [by Gabriel Garcia Márquez] which I read at least once a year, ‘The Story of Philosophy’ by Will Durant, and ‘The Black Swan’ by Nicholas Taleb.
I watched loads of movies, I was watching classics. Mostly in English, hardly any in Hindi or in any other language.

WSJ: Did you take music as well?
Mr. Tomy: I did but I didn’t really listen to too much music because if you continuously listen to music, you are eating up the boat’s batteries.

WSJ: What kind of food did you take with you?
Mr. Tomy: I got a lot of pre-cooked food from Defence Food Research Laboratories.
All we have to do is just heat those packets and you can have them.
I had a lot of freeze dry food that came from New Zealand.
I carried rice, lentils, energy bars, chocolate, soft drinks, nuts, dry fruits etc. etc.
My grandfather gave me pickled fish.
We made up a mixture of all these things and divided them into months.
Each month, the weight should be around 20 kilos.
Every month the box would have say X amount of energy bars, X amount of snacks etc. 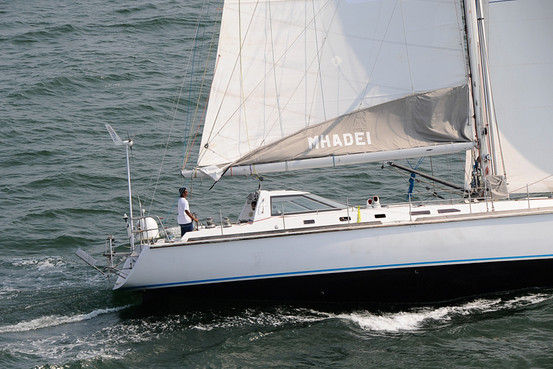 Abhilash Tomy on ‘Mhadei’ during his solo circumnavigation
WSJ: Did you ever you feel lonely?
Mr. Tomy: No, I like being alone.
So I never felt lonely.

WSJ: How difficult was it to do regular household things like washing clothes or taking a shower?
Mr. Tomy: I have been living in the boat [in Goa] since December 2011.
So because of that I got used to everything inside the boat.
Cooking was not very difficult.
As far as showering was concerned, in cold weather I did not wash for about 40-50 days at a stretch. When it got a little warm, I straight away took water from the sea and washed
In fact, most of the time I would brush my teeth with sea water.
And washing clothes is very easy.
I had to soak clothes in detergent and sea water for about a day.
I just soaked the clothes, tied them to a rope and throw them overboard.
Clothes would trail along and get cleaned.

WSJ: What were the challenges that you faced during the expedition?
Mr. Tomy: The weather was the biggest challenge.
And because the weather is always so rough, things keep going wrong.
It’s like you live in a house and you have a cyclone going on outside for the entire month.
Your house will sustain damages. So, that’s what it’s like when you are at sea.
Because you are living virtually inside a cyclone for months at a stretch, things start breaking down and you keep repairing them.
My generator had an issue.
Then the engine one day stopped starting.
Then I had to change another sail at sea.

WSJ: Were you ever tempted to stop at any point?
Mr. Tomy: No, I had problems but on the other side I was able to repair all those issues or I was able to work around them.
The boat was always in a better shape than I had imagined, as far as my planning was concerned. There was no question of stopping.

WSJ: How did you feel when you finally set foot onshore?
Mr. Tomy: The feeling was a sense of loss. I was really sure that I would be more comfortable at sea than onshore.

WSJ: Any tips for aspiring solo sailors?
Mr. Tomy: Do not keep preparing all your life.
You just need to build your boat and sail out someday.