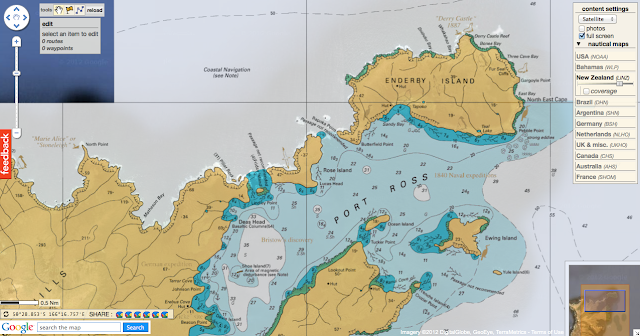 Enderby island in the North of Auckland Island
(Plans in the Auckland Islands: Enderby Island to Smith Harbour Linz NZ2862)
>>> geolocalization with the Marine GeoGarage <<<

Lying in fifth place in the Vendee Globe Bernard Stamm has stopped Cheminees Poujoulat in the Auckland Islands to the south of New Zealand in order to effect repairs to his hydro generators.
He then intends to continue.
Stamm stopped on the sheltered side of island late afternoon yesterday (UTC).
After struggling to find a protected spot, Stamm is ended up moored in Sandy Bay, on the side of south of Enderby Island, to the northeast of the main Auckland island. (Vendee Globe info)

This has offered him protection from the 25 knot northwest wind.
He has reported sightings of whales and sea lions.
The islands represented the last possibility of shelter before Cape Horn, 4,000 miles away. Samuel Enderby & Sons was one of the most prominent English sealing and whaling firms, active in both the Arctic and Southern Oceans.
Also in 1830, Charles became a founding member of the Royal Geographical Society (RGS).
Charles encouraged masters of Enderby vessels to report geographical discoveries and had notable successes with John Biscoe and John Balleny, who between them discovered Enderby Land, Graham Land, the Balleny Islands and the Sabrina Coast.
Another Enderby captain, Abraham Bristow, discovered the Auckland Islands in 1806, naming one of the islands Enderby Island.

Shipwrecks have always been an unfortunate part of New Zealand’s maritime heritage.
For the castaways marooned on offshore islands, particularly in the subantarctic, life was a very grim prospect.
Apart from the trauma of shipwreck, once the basics of food, shelter and fire had been secured, and discipline and social organisation established, there was the dreadful prospect that castaways might never be rescued.
New Zealand’s subantarctic island groups lie in a semicircle to the south and south-east, and many ships that strayed into their path have been wrecked.
The islands lie on the Great Circle Route, which was used by sailing ships leaving the southern Australasian ports for Europe.
The ships dropped down into the Southern Ocean to take advantage of the prevailing westerly winds, which blew uninterrupted on the way around Cape Horn.

Wreckage and the figurehead of the 'Derry Castle' wrecked on Enderby Island, Auckland Islands. Photographed on 22nd March 1887 by an unidentified photographer; copy negative with inscription by David Alexander De Maus.
source : National Library of New Zealand
The figurehead can now be viewed at the Canterbury Museum in Christchurch, New Zealand.
The reef where she ran aground is called "Derry Castle Reef" and the bay this reef is in, is called "Bones Bay".

The Derry Castle, on a voyage from Geelong to Falmouth, was wrecked on this rocky northern coast of Enderby Island on 20 March 1887.
Fifteen drowned, but eight reached Enderby Island and eventually built a punt, which they sailed to Auckland Island and its provision depot. The survivors were rescued in June. (see link) This cover is from the 1880 edition of Wrecked on a reef (or Twenty months on the Auckland Islands)
which was republished in New Zealand in 2003.
François-Erdouard Raynal’s epic account of the wreck of the Grafton and the five castaways’ survival on Auckland Island
helped make castaway stories important in maritime folklore.
Raynal’s account, first published in French in 1870 and in English in 1874, was used by Jules Verne for his book Mysterious island.