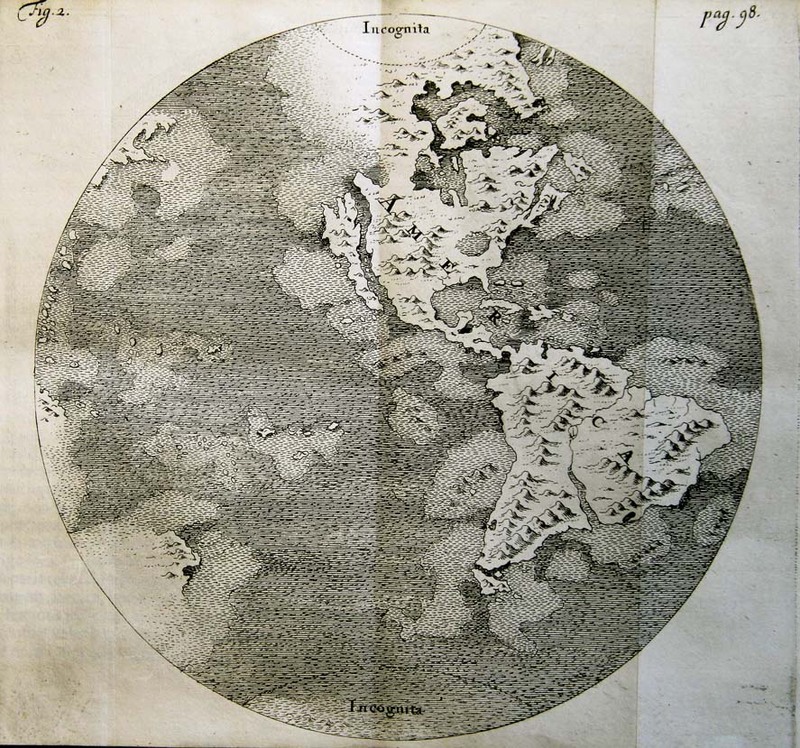 Telluris Theoria Sacra or The Theory of the Earth
First published in Latin in 1681, Burnet’s Telluris Theoria Sacra or The Theory of the Earth recounts the theoretical formation of the Earth from prior to the Great Deluge to its supposed ending in conflagration.
This map, printed some 150 years after the Ribeiro map on display, clearly shows America almost in its entirety, with the Pacific Ocean to the west and the land to the very south still Incognita.
Burnet says in the volume ‘here [is] added a Map or Draught of the Earth, according to the Natural face of it, as it would appear from the Moon...’.

From University of Otago Library

On 28 November 1520, Magellan weaved through the straits that would bear his name into the great expansive waters he dubbed 'Mar Pacifico'.
His venture, representing the first of many Spanish-Portuguese rivalries over the control of the Spice Route, opened up the exploration of the southern seas, a vast tract of water with an endless horizon and numerous islands dotted about, most uncharted. 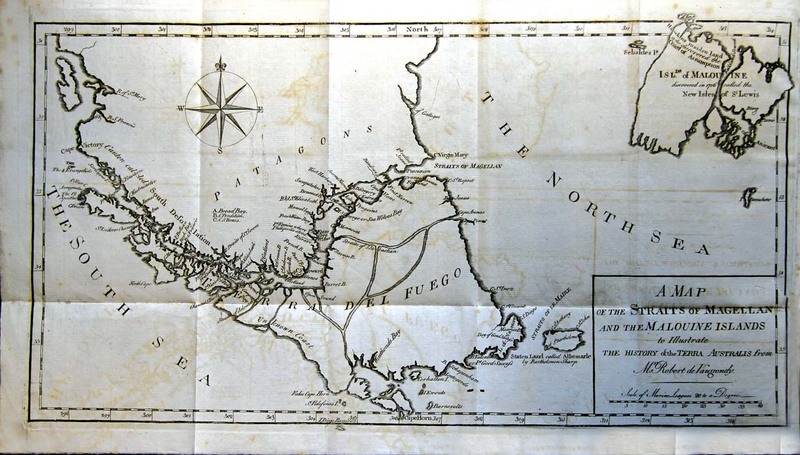 Terra Australis Cognita contains a significant portion of the journal of Ferdinand Magellan (1480-1521) who, on entering the strait on ‘All Saints’ Day’, 1 November 1520, named it Estrecho de Todos los Santos (Strait of All Saints).
After days of weaving in and out of the 570 kilometre straits, he entered a great ocean which he called ‘Mar Pacifico’.
This event signalled the beginnings of South Seas exploration.
From the map on display, it is not hard to imagine the hazards involved in sailing through the straits which now bear his name. 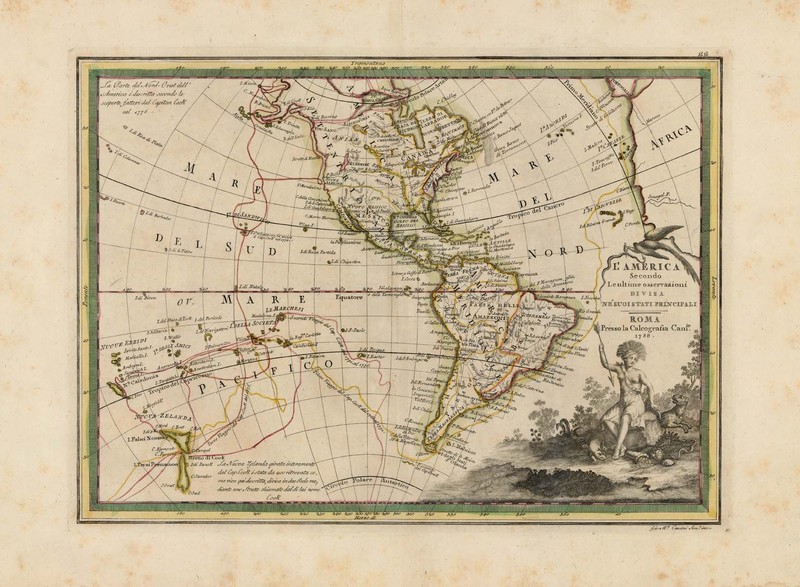 Drawn in 1788 by Giovanni Maria Cassini (ca. 1745-1824), an Italian engraver, cartographer and globe-maker, this Western Hemisphere map shows all Captain Cook’s voyages.
It also marks Cook’s death in the Sandwich Islands on his third voyage.
Cassini produced a three-volume world atlas and some of the South Pacific maps included were based on those originally drawn by Cook himself.
The cartouche drawing is meant to represent America as a young woman surrounded by native animals.

Scientific expeditions began with Bougainville and Cook, each aided by the improvements in navigational equipment, and institutional backing (French institutes; the Royal Society) that funded a full contingent of artists, draughtsmen and botanists to help record and collect. 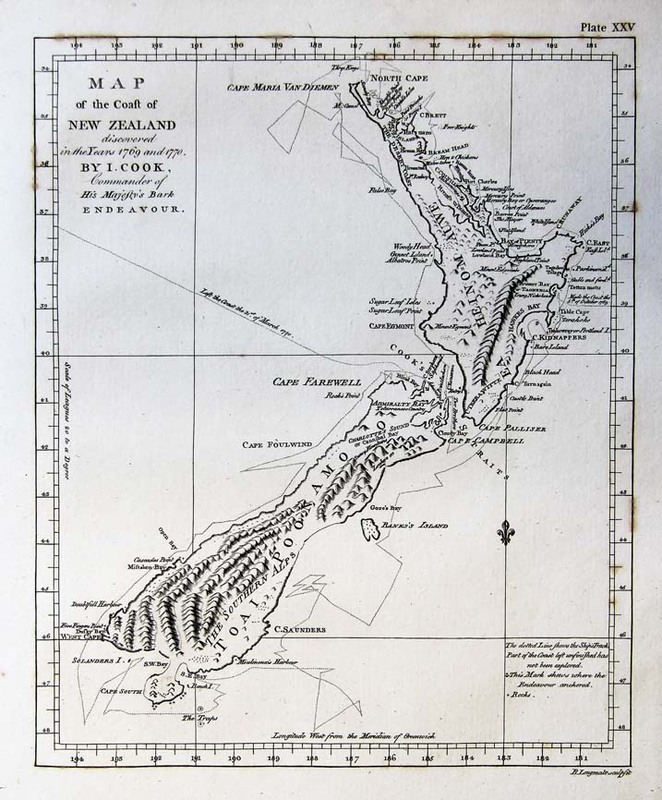 A Journal of a Voyage to the South Seas
Even without the ability to determine longitude on his first voyage (Cook had no chronometer), this map of New Zealand is extraordinarily precise.
Cook managed to capture the outline of New Zealand very well but there are some anomalies.
The middle of the South Island appears a little ‘pinched’ as Cook had no idea how far the Canterbury Plains extended; Banks Peninsula appears as an island; and Stewart Island seems to be connected to the mainland. Note the Southern Alps and Cape Saunders on the Otago Peninsula.

Cook travelled hundreds of miles throughout the Pacific, visiting New Zealand, parts of Australia, Tahiti, towards Southern reaches (thereby disposing of the notion of an imagined southern continent), Easter Island, the Marquesas, Tonga, New Caledonia, and the New Hebrides (Vanuatu), the Sandwich (Hawaiian) Islands, and the North Pacific, vainly searching for a northwest passage.
By the time of his death in 1779, the map of the Pacific was practically as it is now.
It is no wonder that La Pérouse (1785) once said: 'Cook had left me nothing but to admire'

The exhibition 'Charting the Land on the Ocean: Pacific Exploration, 1520-1876' features rare books and maps from the Hocken Collections, the Science Library, Special Collections, University of Otago, and the Heritage Collection, Dunedin Public Library.
Riches do abound in this field, and realistically, not all the material available can be displayed.

Although the exhibition is by necessity selective, three goals are paramount: 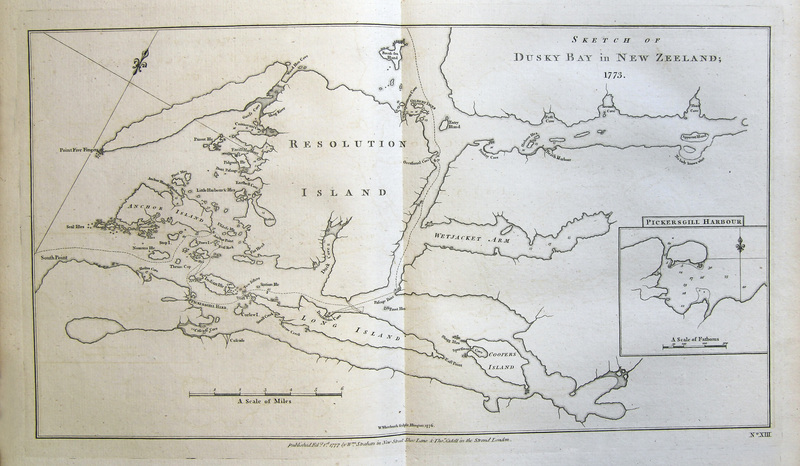