Ocean Health Index provides valuable data.
The earth's oceans are at risk.
Now we can assess the future for our water, our fish and ourselves, if we continue as we are.

Taking a page from the financial sector’s use of the Dow Jones industrial average to track economic 'health', marine researchers have created an index that assesses overall ocean vitality.

The index, described this week in Nature, comprises ten disparate measures that are aggregated into a single score of how well the seas are doing.
The ten measures — which assess features such as food provision, carbon storage, tourism value and biodiversity — were chosen to reflect both the needs of humans and ecosystem sustainability.

Posting a global score of 60 out of 100, the index offers a seemingly gloomy outlook.
Almost one-third of the world's countries scored below 50.
But the study authors say that the range of scores for individual countries — from 36 to 86, with 5% of nations scoring higher than 70 — implies that there are successes amid the areas of concern.

The new Ocean Health Index is designed to assess the importance of the seas to people as well as other species. Here, a man paddles over a coral reef in Bird's Head, Raja Ampat, Indonesia.
“This should not be considered a failing grade for the oceans,” says Karen McLeod, a study co-author and the director of science at COMPASS, a non-profit science-communication organization based across the west coast of the US.
“The real value of the index will be the ability to track progress related to management policies over time,” she adds.

Many marine researchers who were not involved in designing the index agree that useful indicators of ocean health are woefully lacking.
Hundreds of specific indicators already exist, but none does a comprehensive job of integrating different sources of information.

Jane Lubchenco, head of the US National Oceanic and Atmospheric Agency (NOAA) in Washington DC, says the index is “a great leap forward in society’s attempts to understand what the trade-offs are for management decisions”, noting that President Barack Obama's National Ocean Policy calls for a more holistic look at oceans. 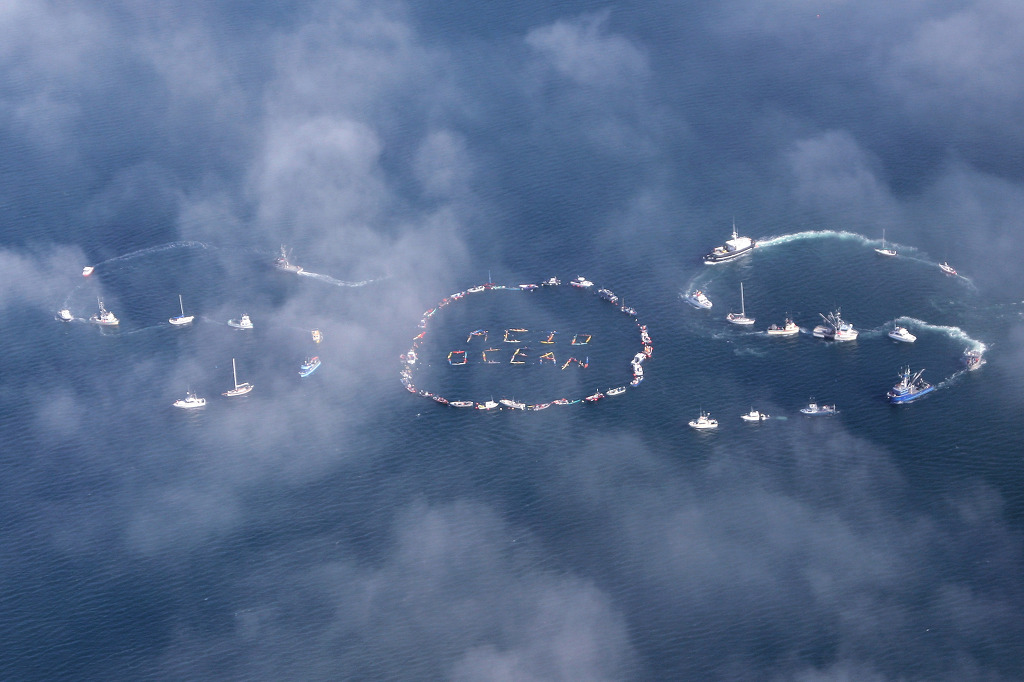 Commercial fishermen and other mariners join together to send an urgent message to save the oceans from ocean acidification caused by fossil fuel emissions in Homer, Alaska, on September 6, 2009.
Over a hundred boats and hundreds of members of the fishing community participated in the event.
UPI/ Lou Dematteis/Spectral Q

Some have raised concerns about how the index assesses fisheries, which were given a global health score of just 25, lower than any other measures except for tourism and recreation (which are grouped as one measure) and mariculture (the farming of fish and other sea creatures).

“I’m concerned [that] managers will wrongly interpret a score of 25 to mean that we could quadruple catches — which is far from being sustainable,” says Trevor Branch, a fisheries expert at the University of Washington in Seattle. Ray Hilborn, a fisheries scientist also at the University of Washington, suggests that not enough is known about maximum sustainable yield in many countries for this metric to be used with any confidence.

Whether policy-makers will adopt the ocean health index is the big question. “Getting a metric or index to gain traction among decision-makers is sort of a dark art,” says Damon Stanwell-Smith, coordinator of the Biodiversity Indicators Partnership, at the United Nations (UN) Environment Programme World Conservation Monitoring Centre in Cambridge, UK.
“People can be quite contrary and will look to undermine anything set up as the ‘best way’ of doing something; the ocean health index is most likely to succeed globally if it’s a slow burner."

The index will soon get exposure.
In October, it will probably be among the metrics considered by the Conference of the Parties to the Convention on Biological Diversity in Hyderabad, India.
It may also prove useful in the UN General Assembly’s first global integrated marine assessment this autumn.

For her part, Lubchenco thinks that the index will be most readily adopted by institutions that manage places rather than particular sectors, such as the NOAA's National Marine Sanctuaries or the state of Rhode Island, which has one of the most comprehensive marine management plans of any US state.