Jason Lewis : the story of the first human-powered circumnavigation of the Earth

Adventurer Jason Lewis  became the first person to circumnavigate the globe using only human power this year when he completed his Expedition 360 after 13 years of travelling.
He explains some of the considerations behind crossing the Atlantic by human power with his his pedal powered boat Moshka, in particular the winds and currents, the same used by early explorers such as Ferdinand Magellan and Christopher Columbus.

In 1519 Portuguese explorer Ferdinand Magellan set out on an ocean voyage with 5 ships and a crew of 270 men. 2 years later, Magellan was killed by Philippine tribes.
In fact, only 18 seamen led by Juan Sebastián Elcano would make it back, becoming the first to complete a true circumnavigation of the earth with the ship Victoria in 1522.

Jason Lewis human powered route imposed on a regular map and a mirror map to show that the antipodes have been reached.

It would take another 500 years before a human-powered world circumnavigation was repeated.
On October 6, 2007, US resident, British Jason Lewis crossed the Greenwich Meridian Line for a second time since July 12, 1994.
He had traveled around the entire planet - without wind or motor assistance, at times pedaling a one-of-a-kind boat 'Moksha' (liberation in Sanskrit) across the world's oceans. Magellan's trip extended over 3 years. Jason's took 13, in parts because to fund his adventure, he took odd jobs such as cattle driving in Colorado or working in a funeral parlor in Australia.
But he always returned to the exact point where he had left off, and continued his way around the world on his own steam.

Jason Lewis’ achievement resulted in the publication of the print and electronic copies of Dark Waters, the first in The Expedition trilogy chronicling the first human-powered circumnavigation of the Earth.

He survived a terrifying crocodile attack off Australia's Queensland coast, blood poisoning in the middle of the Pacific, malaria in Indonesia and China, and acute mountain sickness in the Himalayas. He was hit by a car and left for dead with two broken legs in Colorado, and incarcerated for espionage on the Sudan-Egypt border. 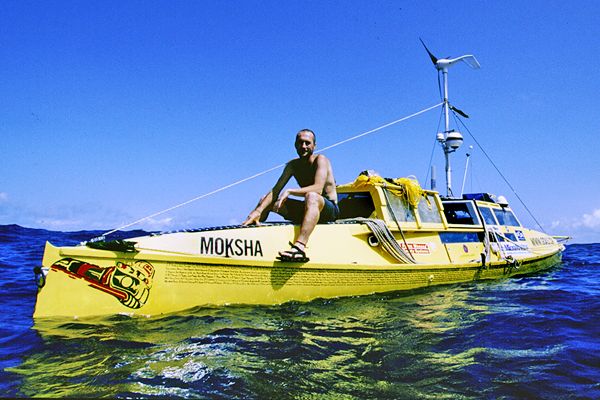 The first in a thrilling adventure trilogy, Dark Waters charts one of the longest, most grueling, yet uplifting and at times irreverently funny journeys in history, circling the world using just the power of the human body, hailed by the London Sunday Times as "The last great first for circumnavigation."

But it was more than just a physical challenge.
Prompted by what scientists have dubbed the "perfect storm" as the global population soars to 8.3 billion by 2030, adventurer Jason Lewis used The Expedition to reach out to thousands of schoolchildren, calling attention to our interconnectedness and shared responsibility of an inhabitable Earth for future generations.